After conquering the Boston Marathon in April, Josh Holley now has his sights on running all of the Abbott World Marathon Majors.

The 23-year-old Columbus North and Purdue graduate, who has autism, became one of only a handful of Special Olympics athletes ever to qualify for Boston. No Special Olympics athlete is believed to have completed all six of the Marathon Majors — Berlin, Boston, Chicago, London, Tokyo, New York — and Holley is intent on becoming the first.

Holley plans to cross the second World Major off his list on Oct. 9 when he runs in the Chicago Marathon.

Coleman and Henry had been scheduled to compete in an Ironman Triathlon event around the time of the Chicago Marathon, but when those plans fell through, they decided they could help out Holley in Chicago. In the meantime, Holley’s mother Deana had reached out to the November Project in search of a support runner, and Nate Sink of the Columbus, Ohio, suburb of Upper Arlington committed to run with Josh.

The November Project is a free, open-to-the-public exercise group founded in 2011 in Boston that has gone nationwide. The name “November Project” comes from the Google Doc that the founders shared to track their progress in November 2011. While sessions occur year-round, the name stuck. 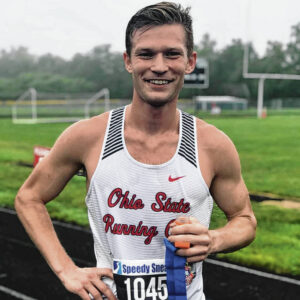 Nate Sink of Upper Arlington, Ohio, plans to run with Josh Holley in the Sept. 24 Mill Race half marathon and the Oct. 9 Chicago Marathon.

“Nate had seen Josh’s name and had heard of him,” Deana said. “We’re excited to have Nate. For someone to take their time like that is special.”

But with Sink and Holley never having met, Sink wanted to do a long run with Holley prior to the Chicago Marathon. Since Holley is planning to run in the Mill Race half marathon on Sept. 24, Sink has decided to travel to Indiana and run with him in that event.

“This is kind of both (Deana’s) and my idea,” Sink said. “She suggested it. I wanted to do a long run with him, and it just worked out that Mill Race was going on, so we figured we’d do that together and just make sure we have a plan going forward with Chicago.”

Josh’s Special Olympics coach, Andy Hunnicutt, has ridden a bicycle alongside him in previous races. But with 30,000 runners in the Boston Marathon and a projected 50,000 at Chicago, that is not an option.

Sink, who is part of the National Guard Marathon team, ran the Boston Marathon in 2019 and again this year. He ran 2 hours, 35 minutes this year, which was about 50 minutes faster than Holley’s time. Holley, however, ran a 2:53:55 in last year’s Indianapolis Monumental Marathon to qualify for Boston.

“I think what we’re going for with Chicago is the 2:50 mark,” Sink said. “I’ve paced a couple of my friends before, and I’m pretty comfortable with it. I don’t want to mess anything up for him. I want him to have a good race.

“I’m really excited for the opportunity,” he added. “I thought it would be cool to help someone else out with something that’s brought me so much joy. I’m very excited to go to Columbus, Indiana.”

Holley, who is recovering from a bout with strep throat, was planning to do a 13-mile run with Henry on Monday in preparation for next weekend’s Mill Race half marathon. Holley is looking forward to Mill Race as a tuneup for Chicago.

“It will be my first run with Nate,” Holley said. “He’s been in the National Guard, and he’s a very fast runner.”