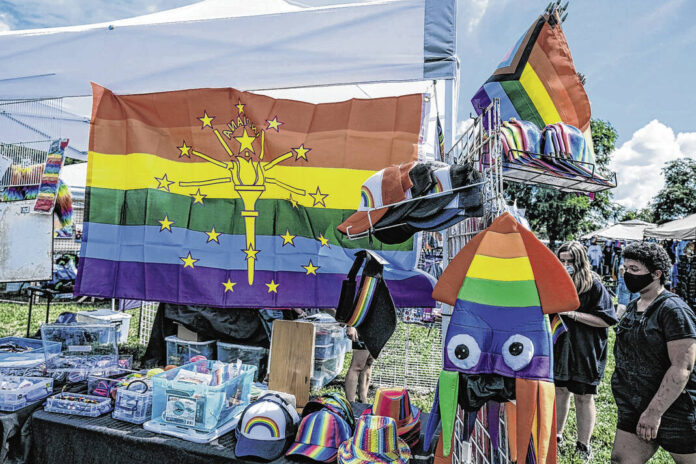 A substantially expanded Columbus Pride Festival on Saturday after the Mill Race Marathon will welcome 50 percent more vendors — 92 in all — and a whole new children’s area with crafts, games, painting, children’s stories presented by the Bartholomew County Public Library and more.

Plus, the festival’s popular drag show will be expanded to two hours — twice the length as before, organizers said.

More food vendors will be on hand than ever before since the event began in 2018 along Fourth St.. The menu will include everything from tacos to burgers to desserts. Live music acts just got finalized.

The free event will unfold from 1 to 7 p.m. at Mill Race Park on Fifth Street in d0wntown Columbus.

Katelynn Herrick, festival director, said the goal is to draw at least as well as last year’s gathering that drew an estimated 2,500 to 3,500 to the park.

“Our goal is always to at least maintain (attendance),” she said.

Toward that goal, organizers purposely scheduled it to begin after the marathon to capitalize on out-of-town visitors.

“We’ve had several meetings with the marathon people,” Herrick said of coordinating details, including setting up some parts of the event after the marathon’s Friday evening children’s fun run to be held in the park.

She said the closest parking will be in the Cummins Inc. parking lot across Lindsey Street from the park.

The event celebrates the local and regional LGBTQ+ population and their friends and families.

The gathering earned worldwide media attention its inaugural year because publications focused on a local, bisexual teen student who organized it in the hometown of the conservative and then-U.S. Vice President Mike Pence.

The festival’s website summarizes its purpose as “to unite Columbus as one community that celebrates diversity, fosters inclusion for all and embraces the LGBTQ community.”

The general expansion of the festival is due to having a larger organizing committee to plan the event, according to Herrick. The new children’s area is something planners wanted to institute in past years, too.

“We definitely pride ourselves on being a family-friendly event,” Herrick said.

In the past, the festival has attracted attendees from Indianapolis, Bloomington, and a broad range of other areas throughout the state and elsewhere. Erin Bailey, then a senior at Columbus Signature Academy — New Tech High School, originally organized the festival four and a half years ago as her senior project.