It will be Columbus vs. Bloomington Friday night in high school football.

Columbus East will host Bloomington North for its homecoming. Columbus North will travel to Class 5A No. 5 Bloomington South in a battle for Conference Indiana supremacy.

For the second year in a row, the Bull Dogs (3-3, 2-0) can prevent the Panthers (5-1, 4-0) from finishing unbeaten in the conference. While Bloomington North plays out of conference the final two weeks of the regular season, Columbus North still will have conference games remaining against Bloomington North and at Terre Haute South.

“It’s an exciting week for our program,” Columbus North coach Logan Haston said. “We kind of found out Friday that we’re going to get everybody’s best shot in this conference, and that’s not going to be any different this week with Bloomington South. We know they’re a very good football team. They’ve taken care of business when they needed to, and we have to be ready to play.”

The Bull Dogs had to survive a late comeback by Terre Haute North on Friday. The Patriots rallied from a 28-7 halftime deficit to tie the game with 52 seconds remaining, only to see Columbus North drive for a 38-yard touchdown pass from Zac Horn to Damon Edwards with 9-tenths of a second left.

“It’s ultimately just about playing a full 48 minutes,” Haston said. “That’s been an issue for us this year. Either we start games slow, or we don’t end games the right way. We just have to have the maturity to play a full, complete game, and then not beat ourselves. We did some silly things there in the second half penalty-wise and being undisciplined. So we have to use that as a learning opportunity, grow from it and make sure it doesn’t happen again.”

For the Panthers, senior Zach David has completed 57 of 87 passes for 759 yards and eight touchdowns. Junior Gavin Adams has carried 100 times for 675 yards and four scores. Junior D’Andre Black has 18 catches for 278 yards and one touchdown, and junior Lucas Waldon has 25 catches for 252 yards and three scores.

“They’re very balanced,” Haston said. “They’re big with the RPOs (run-pass options) and getting their guys the ball in space. Their quarterback has a quick release and makes good decisions with the football. He gets the ball to his playmakers, so defensively, we have our hands full. Then, their defense, they just rally to the football. They’re very disciplined. You know what they’re going to do defensively, and they do it very well. So we just have to be able to execute the same way that they do and get it done.” 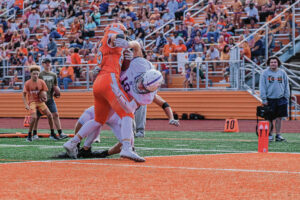 Meanwhile, East (3-3) will battle Bloomington North (3-3) for the first time since playing the Cougars in the season opener from 2012-17. Bloomington North won 49-7 last week against New Albany, a team the Olympians beat 42-7 the previous week.

East was upset 14-12 at Floyd Central on Friday.

“I think it really started with New Albany,” East coach Eddie Vogel said.” The (New Albany) score was not really indicative of the way the game was played. We were able to turn them over six times, and we were able to turn those into points and a couple defensive scores. So we have to get better. We have to figure out how to be able to run the football. The last two weeks, we haven’t run it great, so that’s the focus this week — getting back to controlling the line of scrimmage and being able to run the football.”

That might be easier said than done with a couple of Olympians likely missing Friday’s game because of injuries.

East senior Ethan Duncan has completed 50 of 93 passes for 6-1 yards and five touchdowns. Senior Javeon Smith had carried 92times for 480 yards and three scores, and senior Chase Zapfe has 20 catches for 181 yards.

“(Mikulich and Steinfeldt) really stand out on tape,” Vogel said. “I think their back runs really hard. We’re going to have to get a lot of guys to the football and swarm him to kind of get him stopped because once he gets going, he’s really good. Then, I really think all their skill players are good, not just the tight end, but they have a couple receivers that are really good players, as well. So that’s going to be a challenge.”

After Friday’s non-conference game, the Olympians will be back in the Hoosier Hills Conference to host Jeffersonville and visit Bedford North Lawrence the last two weeks of the regular season. East is tied with BNL, Seymour and Floyd Central for the HHC lead.

“I told our guys after the game on Friday that the sun will come up,” Vogel said. “We have a lot of football left, and all of our goals are still achievable. We got back to work and had a great practice (Monday), and we expect to play well on Friday.”