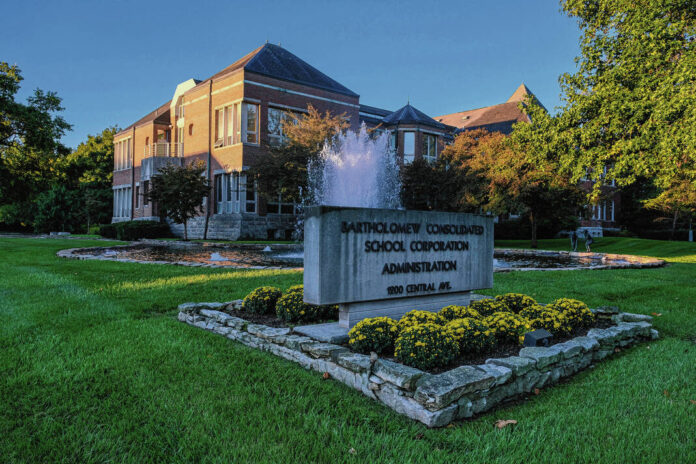 The two candidates running for the Bartholomew Consolidated School Corp.’s District 4 seat have differing opinions when it comes to Diversity, Equity and Inclusion (DEI) and Social Emotional Learning (SEL).

Dale Nowlin and Eric Grow are running for the District 4 seat currently held by board member Julie Bilz, who is not running for re-election.

Nowlin is an occasional substitute and former long-time BCSC teacher who was a candidate for the Indiana House of Representatives District 59 seat in 2016, 2018 and 2020.

Grow, who works and co-owns Growby’s RTO, has spoken often during the time for public comment at BCSC school board meetings, expressing concerns regarding issues such as COVID-19 protocols, transparency, communication and explicit material in school libraries.

In responding to a question from The Republic about critical race theory, both men brought up the school corporation’s DEI and SEL initiatives.

Grow’s campaign site states that DEI initiatives “destroy the individualism of our children by judging our students as members of groups, a discriminatory and dehumanizing practice” and SEL’s stances on self-esteem and compromise “destroy the notion of objective truth and are a major cause of the sharp increase in mental health-related issues among our children.”

“I realize, because of this, that there would be controversy around my expressed opinions regarding these ideologies,” Grow said. “And that was my main reason for doing it, not to cause disruption but to open the door to discussion.”

Nowlin said that there’s a lot of misinformation circulating around SEL and that it’s the new hot button issue, with some people claiming that it contains a “hidden agenda to indoctrinate kids.”

He said that it contributes to increased academic achievement and greater productivity.

Nowlin added that there are people and movements that want to get public education “off track” by focusing on hot button issues such as critical race theory and lumping items such as Diversity, Equity Inclusion in with it.

“According to my opponent, diversity is a bad thing,” he said. “And I think that comes out of a misunderstanding of critical race theory. Diversity training, I don’t understand how anyone could think diversity training is a bad thing. As a teacher, I grew up in an all-white school. And for me to be expected to go in and teach students of color and think that they’re coming from the same background that I did at my all-white school is setting them and me up for failure. So diversity training helps teachers to understand where kids are coming from so that they can meet their educational needs.”

He added that inclusion, in terms of education, refers to making sure that students with special needs are able to learn in the “least restrictive environment” possible, which is required by law.

Grow and Nowlin were asked the same five questions posed by the Republic. Their answers were as follows:

Q: How do you define critical race theory (CRT), and what is your opinion on it?

“It’s a critical theory which came out of the Frankfurt School from intellectuals like Marcuse, meaning that it’s a theoretical framework or a sort of lens to view the world through at a more structural and systemic perspectives,” said Grow. “So with critical race theory, we would be talking about focusing on how racism endures in our society through structural and systemic ways, for example through our laws, through economic disparities or educational disparities, implicit biases.”

Grow said he doesn’t see critical race theory being discussed much in BCSC schools. He added that, in his opinion, CRT that “stays at the level of critical theory” is fine. However, the results of putting it into practice raise concerns that should be addressed if present in local schools.

Nowlin said he understands critical race theory to be a course taught in law and graduate schools that “frames things in terms of race and racial outcomes.” He added that it’s not taught in K-12 schools.

Nowlin said that parents who are concerned about critical race theory or other topics that they think are being taught in schools should refer to the state standards, which is what curriculum is based on.

“If you look through the state standards, there are things about race and issues that have historically been part of U.S. history in terms of race, but critical race theory as a topic is not part of our standards,” he said. “So I guess that’s what I say to that. It’s not taught in schools. We certainly teach about race and racial issues, because that’s part of our history and it’s part of our current events.”

If parents are concerned that their schools are deviating from state standards, they should bring this concern to their teacher or principal, Nowlin added.

Q: What is the number one thing that motivated you to run for this office?

“The profound importance of the education of our children and the fact that, once again, a large portion of our community wasn’t going to have anyone to vote for to represent their views and their perspectives,” said Grow. “You kind of couple that with the state we find our systems of education in. That ship has been steered in the same direction by the same, internal experience from within for a very long time, so it kind of created a very unilateral perspective, I think.”

In discussing his reasons for running, Nowlin said that he’s spent his entire career in education and recently retired.

“I see this as a way for me to continue that, to serve the community in my passion, which is public education, to use my experience and expertise to help continue to make our schools better,” he said.

Q: Do you think teachers are being compensated adequately? What can BCSC do to improve teacher retention and recruitment?

Grow said that compensation needs to be improved and that it includes more than just salaries.

“I honestly consider myself, by state standards, a fiscal conservative,” said Grow. “But I also believe that teachers are the most important asset in the education of our children, which is the whole purpose of the existence of our school system.”

He added that he doesn’t think the issue should be solved by higher taxes but instead by using the school corporation’s current funds effectively. He would also seek the input of administrators, teachers and community members in determining appropriate pay for BCSC teachers.

In discussing recruitment and retention, he said that he would want to see what tools could be added to the human resources department.

When asked if teachers were compensated adequately, Nowlin’s initial response was a laugh.

Some of this needs to be done at the state level, said Nowlin. He also noted that, at a local level, BCSC’s recent referendum has helped, but the issue needs to remain “at the forefront of what we do.”

Q: What can the school corporation do to address the ongoing impacts of the pandemic, both in terms of academic recovery and mental health?

Grow said that it’s important not to ignore such problems; instead, they should be a matter of public conversation and collaboration.

“Problems that complicated, they’re not going to be solved by a small thinktank of people,” he said. “They’re just too complicated. They’re too complex. They require too much involvement to solve. So we need to be open about these issues to promote awareness and then from there we can drive participation, inviting all perspectives to the table to be able to evaluate and hear each other and come up with the best solution. But it’s going to take a community, and it’s going to take a lot of supporting each other.”

In terms of academic recovery, Nowlin noted that BCSC has used COVID relief funds to add more teaching staff in order to reduce class sizes and help students catch up.

“Additionally, I know that teachers have and teachers needs to continue to flex the curriculum,” he said. “Because kids — just as an example, kids going from 4th grade to 5th grade didn’t get as far in 4th grade as they typically would have. So I think a big thing there is, I’m a huge proponent of teachers having curriculum time and time for teachers to adapt their curriculum to meet some of those changing needs.”

In regards to mental health, he said it’s important to raise awareness and connect students with counselors both inside and outside of the school system.

Q: Over the past couple of years, the relationships between many local school boards and community members have become strained and, in some cases, combative. At a local level, what can both parties do to promote good relations and communication?

“We have to take down the barriers,” said Grow. “We have to be accessible to one another and not just in words but in practice and in policy. And really, we have to go a step further than that. And we need to be willing to put forth the effort and make the sacrifices necessary to engage with one another, to be proactive.”

In order to do what’s best for kids, the school board and community must have a “strong, constructive relationship,” Grow said.

Nowlin said that, if elected, he would have a time, at least once a semester, where he would be available at the schools within his district so that teachers, parents and students can tell him their concerns and ideas.

The responsibility to clear up false information falls on both community members and school board members alike, Nowlin said.