Grace LaSell’s life and health changed forever when she was in middle school.

LaSell received a diagnosis that her kidneys were failing in the summer of 2019 between her sixth and seventh grade years. Instead of celebrating her transition from elementary to middle school, she would spend the next two years in and out of the hospital for checkups, getting catheter lines installed in her neck and hours on dialysis machines.

Now a sophomore at Columbus East and three years removed from her diagnosis, LaSell has new kidneys, a new lease on life and budding sports career on the Olympians’ girls golf team.

LaSell began feeling her symptoms in the summer of 2019 when she was vacationing with her family at Universal Studios in Orlando. While she was walking around the park, she noticed her knees and legs were swelling up. At first, LaSell didn’t know the exact issue and thought it was swelling from leg fatigue because of walking so much that day.

“I tried not to worry about it, but in the back of my mind, I knew something was wrong,” LaSell said. “We did think this could be something bad, but we were trying to stay positive because it was our family vacation.”

When they got back to the hotel, LaSell recalls her face and stomach started swelling, as well. So when she sent pictures to her mother, Laura Nelson, who is a nurse practitioner at Doctors Park Family Medicine, they went ahead and scheduled a doctor appointment when they got home. Curious as to what could be the possibility of her swelling, LaSell did a quick Google search of her symptoms and one of the first conditions to come up was kidney failure. When she told her father Tyler about it, they all agreed not to worry about it too much and wait until the doctor appointment, but the fear still lingered.

“It was obviously very frightening,” Nelson said. “They were telling me how she was feeling. I immediately called her pediatrician, whether if we needed to come home, or do we seek care there in Florida. We weren’t real certain what was going on, so we scheduled an appointment.”

When LaSell arrived home, they went to the doctor early the following morning. The initial lab results weren’t normal, so then LaSell was referred to a nephrologist at Riley Hospital in Indianapolis that afternoon. The doctors performed a biopsy and wanted LaSell to stay overnight for observation. In the early morning hours the next day, the doctors told her the bad news that her kidneys were in renal rejection and would need a transplant.

“I don’t know if our brains immediately went to kidney failure, dialysis and transplant, but we knew something wasn’t right with the kidney,” Nelson said. “It took the first week at Riley to really begin to piece through what was going on.”

Doctors in the rheumatology department believe LaSell’s kidney failure was due to ANCA vasculitis, an auto immune disorder affecting small blood vessels in the body.

“We’re not sure if I had this disease over the course of my life or I developed it, but we think it was over my entire life,” LaSell said. “It didn’t really start showing symptoms until it came after my kidneys.”

LaSell went into surgery immediately following the diagnosis to insert an emergency dialysis port in her neck to help remove poisons and other fluids that a kidney would get rid of normally. A week later, she was switched to a peritoneal dialysis catheter, which helps remove waste products from the blood, in her abdomen. She ended up on home dialysis for about two years with the catheter. In those two years while on the catheter, she had checkups with the doctor every few weeks while she waited for a transplant.

“When I first got diagnosed with it, it really didn’t take a second to click for me. It was when I started asking more questions, it finally clicked for me,” LaSell said. “I like, ‘Oh my gosh, this is real life.’ When I was first in the ICU, especially, it was all fuzzy, and the timeline didn’t add up, but then I feel it all added up at some point.”

On March 17 of last year, LaSell got the news that she wanted for two long years and that there was a match from someone in St. Louis. She finally got the transplant at Riley and got the ports removed, but still has the scars as a reminder of the process she endured doing those two years. She also is taking anti-rejection medication, which she will be on for the rest of her life. The medication prevents her antibodies from attacking her kidney.

“I was really excited, but also a little nervous. In a lot of surgeries, there’s a lot of risks and complications, so that’s always on my mind,” LaSell said. “I was excited because I knew this was going to change my life.” 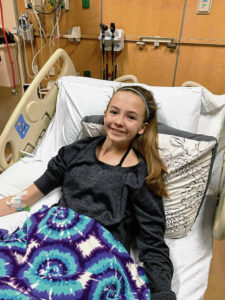 Grace LaSell at Riley Hospital in Indianapolis in the summer of 2019. LaSell was diagnosed with kidney failure as a middle schooler. Last year she received a kidney transplant from donor in St. Louis.

After the transplant, LaSell had a vascath put in incase of a needed dialysis and mentioned that it’s common for children to not have the kidney work for a couple days after. For her, she said her new kidney worked in a normal function.

The vascath took a toll on LaSell, making it sore on the neck and shoulder nerves that made her sometimes numb on the right side of her body. She had physical therapy for two weeks, which helped subside the soreness and numbness. 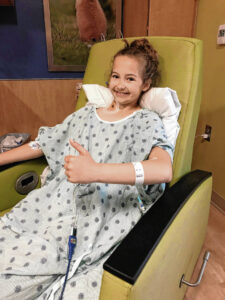 Grace LaSell gets ready to receive her kidney transplant on March 16, 2021 at Riley Hospital in Indianapolis. In 2019, LaSell was diagnosed with kidney failure as a middle schooler. Last year she received a kidney transplant from donor in St. Louis.

It seems like things were going back to normal for LaSell, but she experienced some complications a month later and had to have a couple of surgeries. She stayed at the hospital for a few days to make sure everything was fine before being released by the doctors.

LaSell said there weren’t much restrictions following her kidney transplant. She couldn’t play golf full-time for three months in order for her incisions from the surgery to heal during her freshman year, but was still allowed to do some chipping and putting.

This spring, she was back at Walt Disney World with her school’s show choir when she forgot to take her scheduled anti-rejection medicine. She went into cellular rejection from missing her dose. Because it was caught fast, it was very treatable.

Friends and family have always wondered how this could happen to someone like LaSell, and their concerns are warranted. It’s rare for LaSell or any person to have kidney failure and transplants.

“Someone’s tragedy was our absolute beautiful miracle because none of us matched,” Nelson said. “It makes it important to be a donor and let families know the difference it can make. They grief can turn into something beautiful. She gets to have this lovely, teenage life again that she didn’t have for a couple years when we were having to do dialysis every night.”

LaSell also missed a few months of school following the transplant. She had to do most of her work at home. Many of her friends thought at the time that she was lucky she didn’t have to be at school. For LaSell, it was tough not seeing her friends every day. She mentioned that Riley supplies kidney transplant patients with a therapist to talk to if needed and said that helped out, as well.

“That was definitely really hard when I couldn’t go to school because I’m really a social person,” LaSell said. “I definitely was in a little bit of a depression because I was lonely, but after those few months, I felt a lot better.”

After all the transplants and hardships that she’s faced, LaSell has found a way to maintain a positive attitude toward life. She said people treat her like normal, and no one treats her any differently now than they did before she became ill.

LaSell said she makes people less tense and more comfortable around her when she will make a few puns here and there about her condition.

“It doesn’t always make people around me feel like, ‘I’m so sorry for you.’ It makes them part of the joke,” LaSell explained. “People think I’m a really funny person because I make jokes of the bad things in my life. I always say, ‘If you can’t be positive about the bad things, then it’s not a fun life to live.’”

LaSell said she feels better than ever physically and mentally after more than a year removed from her transplant. Even though she felt fine, she never realized how sick she was until after she got her transplant.

“I feel like it’s a hard thing to wrap your head around,” LaSell said. “I think at some point, things happen, and you can’t control it. I did have those thoughts were it’s like, ‘Why did it have to be me?’”

LaSell hopes to visit kidney camp next summer. She wanted to go to kidney camp in 2020, but it was canceled due to the COVID-19 pandemic. She planned to go in the summer of 2021, but couldn’t because of her transplant.

LaSell said when she turns 16 years old, she’ll be in a clinic where she will meet with other kids that have had kidney transplants that basically instruct kids how to deal with insurances and prescriptions once they reach adulthood.

Because of the life expectancy of new kidney, LaSell will need a transplant around every 10-to-12 years. LaSell wasn’t afraid to admit she’s worried about going through the process again. For now though, she wants to live life as a normal high school student. She wrapped up her sophomore season of golf last month.

After growing a relationship with Susie Hedrick, one of the nurses at Riley, LaSell is thinking of getting into the nursing field when she becomes an adult. Hedrick has made a huge impact on LaSell and has showed her what is nursing is about. 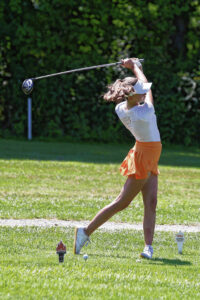 “I’m trying to live in the moment and not worry about the future. I feel like I’ve gone through it before and I’ve coped with it OK. I’m happier I got my kidney transplant before high school so I can live a normal high school life,” LaSell said. “It worries me a little bit, but I’m trying to stay focused on the right now and not worry about the future and try to keep myself as healthy and active for a while.”