It was four years ago that Baker, Krueger and Mendez were competing on the national stage together in middle school at St. Peter’s Lutheran School.

Mendez got started in cross-country in the seventh grade, but didn’t run cross-country his freshman and sophomore years because he was playing soccer. For Baker and Krueger, it was back when they were in elementary school. The duo had their first interaction when they did “Girls on the Run” together.

The transition from running middle school into high school has changed for the trio. The biggest differences include more high-volume training and conditioning and running much longer distances.

“I’ve had great coaching for cross-country all of my time running, so that aspect hasn’t changed. It’s just that high school cross-country is more demanding than middle school. There has to be a way in the way that you’re coached, but it’s been a good change,” Baker said. “We are capable of doing more, so our coaches expect us to be able to do certain things. In middle school, I wasn’t running the same things I was running now. Now that we’re older, coaches know we can handle that.”

In addition to running more, Krueger mentioned that at St. Peter’s, they all trained and ran together. At East, the boys and girls run and train separately.

“For us, the girls only practice with the girls. At St. Peter’s, it was the whole combined team, so we train separately now,” Krueger said. “One thing we that we do now is have ‘Pasta Parties’ every Friday before meets. It’s really fun to be able to do that every week before meets.”

Running at a private school like St. Peter’s, the competition pool is really small. Mendez noted that they didn’t face a broader competition until the middle school state meet. He added that it helped him face off against the tougher competition in high school.

“Coming from a private school, the meets were a lot smaller. We didn’t really see any competition until our middle school state meet, where we raced against all the public schools. When we raced against the public schools, it brought more competition to us. It allowed us to grow seeing those bigger teams and being able to race against faster runners,” Mendez said. “In high school, we’re set with racing against teams like Carmel, Center Grove, Fishers, all those big teams now in the state. It sets us up well to compete now that we’re already at that higher level of training and higher level of thinking going towards those lofty goals that we set ourselves.”

In addition to running in the fall, the trio also run track in the spring. Krueger runs the long distance events and 4×800-meter relay for East. Baker and Mendez also do the middle distance and 4×800 and 4×400 relays for North. 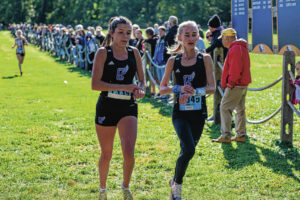 Baker mentioned running at St. Peter’s helped her give her the drive and competitiveness that makes her the runner she is today. She also added that while running in middle school and high school, her parents gave her incentives to help achieve the goals that were set.

Baker recalls in middle school, her parents would get her a dog if she performed well. After placing second in the cross-country Lutheran School nationals in eighth grade, her parents got her a dog. Another goal was, if she won a race, she would get a new phone. She said that she eventually got the new phone.

Baker also quipped that she asked her father if she won the 800 that she wanted his car, even though she knew that wasn’t going to happen, which was why she jokingly made it a lofty goal.

“I had these little things that would drive me to do as best as I could, but now it’s that I want to do good for my team and for yourself,” Baker said. “Running in seventh and eighth grade has helped with my competitiveness. It’s definitely grown quite a bit. The goals definitely did help.” 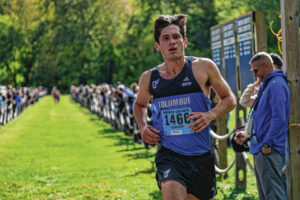 Mendez said he has set goals along the way over the years of running. He mentioned his biggest goal individually is to run in under 15 minutes, 20 seconds for 5,000 meters (3.1 miles) and place in the top 10 at the state finals meet.

Mendez has run pretty consistent in meets this year. His Conference Indiana meet time and sectional times were 15:34.

“The bar is really set higher now for high school. Compared to middle school, the bar was only set at a certain amount our coaches thought we could reach. I’ve had great coaches my whole running career, so with having great coaches, they think you can perform better based on the training they’re giving you,” Mendez said. “With my training now, I can hit a certain performance based on marks I’ve hit before. So, that’s really helped me in high school now, getting to know what specific points I can hit and which one I can achieve next.

“Our goals as individuals is we want to be a a certain point in the race. We like setting these goals for ourselves,” Mendez added. “That way, we can go it and achieve it. I feel like it’s best to set smaller goals like a staircase, it slowly climbs up.”

Going into Saturday’s semistate meet at Brown County, the top-ranked North girls and fourth-ranked North boys are the favorite to win both races.

While the East girls team is unlikely to advance as a team, Krueger is hoping she can make it out as an individual and experience the state finals meet.

“Being able to encourage all the new people who are joining cross-country, especially with our team goals, we lost a lot of seniors last year, so our goal was always to make it back to semistate. It was a little more difficult,” Krueger said. “We’re definitely keeping everyone positive and taking it week by week. A personal goal for me would try to qualify for state.”

Krueger and Mendez are still undecided if they want to continue cross-country at the collegiate level, but both wanted to have an emphasis on health care as their academic study. Baker, on the other hand, decided last month that to continue her running career at Tennessee.

“I think we put in the work to be the leaders of our teams,” Baker said. “It’s great that we are all doing it again.”

The trio have enjoyed much success in middle school and high school. It’s bittersweet that their high school cross-country careers will be coming to an end in less than two weeks, but they’ve enjoyed every second of it.

“I think it’s come full circle from being in middle school in eighth grade and senior year, which I never thought I’d be a senior this fast,” Mendez said. “Now, being a leader on the team, it just changes the way I look at things. I only have a certain time to achieve times in a certain time frame. It really puts almost pressure on you to want to achieve your team goals, and it makes you become a better runner in general.”

Krueger added, “I think being exposed to such great quality coaching, it made it so that we could see goals that we wanted to achieve and that they could get us there. At St. Peter’s, they taught us not only to strive for excellence in athletics, but also all areas of our life and going into high school, and trying to do well in everything we do.”