RIO GRANDE VALLEY, Texas — One hundred and ninety-four. That’s how many collegiate volleyball matches the University of Texas Rio Grande Valley graduate student defensive specialist Sydney Schoen has been a part of in her career. And at all 194 — and counting — Sydney’s parents have been along for the ride.

Added Sydney’s mom, Becky Baker-Schoen: “It just never crosses our minds not to be here. This is something we really enjoy and we wouldn’t miss it for the world.”

Sydney’s career began at Eastern Kentucky in August 2018. She spent four years playing indoor and beach volleyball for the Colonels while earning her Bachelor’s degree in exercise sports science and a minor in chemistry. Her parents also graduated from EKU, where Jerry played baseball and Becky played indoor volleyball. The Schoens were excited when Sydney chose EKU, but they never tried swaying her decision. They toured countless schools across the country with Sydney and her older brother Jared when they were young so they would know what different places had to offer.

“I wasn’t planning on going to the same school as my parents. It just happened and it worked out for the best,” Sydney said. “It’s nice because now we’re all three alumni from that university so it’s definitely something that’s special and unique to our family and I’m proud of that.”

EKU was a three-hour drive or less from their home in Columbus, allowing Becky and Jerry to drive to most of Sydney’s matches her first four years. Their longest trip during that time was to the University of Jacksonville, which was an 11-hour drive.

So, when Sydney decided to use her fifth year to study and compete at UTRGV, which is over 1,400 miles from home, did Becky and Jerry ever worry that they may not be able to watch Sydney as often?

“No doubts,” Becky replied instantly. “It was more like, ‘Okay, we’re going to be poor for a while’ and we sat down and started booking flights. It’s a lot of coordination and we knew we’d have to dig into our pockets. But it’s a sacrifice that’s short term.”

The distance hasn’t been easy for the Schoens, who are now flying every weekend and sticking to a strict budget to afford all the travel. Jerry joked that they won’t be taking any trips for the next five or six years. But they never thought twice about making sacrifices to ensure they could soak up every second of Sydney’s final season, and they’re grateful for jobs that allow them to do so. Becky works in the IT department for Cummins Inc., which is a hybrid position that allows her to work remotely. Jerry is in his 30th year as a physical education teacher at Hauser High School, where he also was head baseball coach.

“This year has been tough, but we didn’t want to not see her because you never know when it could be the last time,” Jerry said with emotion in his voice. “Our parents weren’t able to go to our college events 30 years ago, that’s just the way it was. We’re able to do this with our jobs and we’re able to make some sacrifices and of course our kids make some sacrifices for us to be there, too. We always tell her, if you’re there, we’re there. We’re in it for the big picture, for the team and to get to know the girls and their families and all that.”

James Martinez, UTRGV’s Senior Associate Athletic Director for Business Operations and the sport administrator for volleyball, said everyone involved with the team has grown to love seeing the Schoens at every match. He recalled seeing Becky using Google Translate on her phone to have a conversation with sophomore setter Luanna Emiliano’s mom in Portuguese at the Utah Valley match. He said the Schoens have been friendly and helpful and has enjoyed getting to know them throughout the season.

“They decided this is what they wanted to do for their daughter and it’s amazing. They’ve come to love UTRGV, and I know the team loves them,” Martinez said. “Speaking to Sydney about it, I know it means a lot to her. She appreciates what they do and the commitment they have to her and the team. I think it’s a part of who she is as a player and it’s probably why she’s as good as she is.” 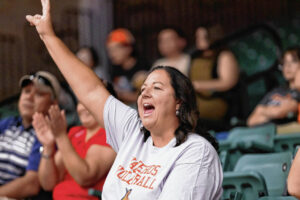 Sydney’s parents have comforted her after bad matches and made the good ones even sweeter. Jerry’s favorite moment of this journey was Sydney’s first ever match – a surprise start as a true freshman at No. 6 Penn State. For Sydney, getting to celebrate winning the 2022 Western Athletic Conference regular season championship with her family made it extra special. But the little moments in between, like sitting in a hotel lobby together after a road match, are just as memorable. Their relationship has strengthened from Sydney’s freshman year to now, and it’s something they’re all thankful for.

“It’s really nice to have them and to have that support. At this point, I do expect them to be there, but at the same time I tell them there’s no pressure and it’s OK if you can’t, but they’re always like, ‘No, we’ll be there,’” Sydney said. “They genuinely want to come to the games and it’s so special that they have. I’m very appreciative.”

Sydney hopes her time in the Rio Grande Valley is far from over. She’s currently working on a Master of Science in Bioethics and has a goal to continue her education to get into sports medicine or orthopedic work. She’ll apply to the UTRGV School of Medicine in the summer.

Fortunately, the Schoens have a good option for housing when they visit. They met Tony and Judy (Brebner) McDaniel at Hauser, where Judy taught for several years and Becky coached their daughters in volleyball. The McDaniels were both student-athletes at legacy institution Pan American University. Tony played for the Broncs men’s basketball team from 1979-84, and Judy was on the women’s basketball team from 1981-84. They returned to the Valley five years ago and have offered their home and assistance to the Schoens the last four months.

The Vaqueros are hosting the first and second rounds of the Women’s National Volleyball Invitational Championship (NIVC) at the UTRGV Fieldhouse this weekend.

Becky and Jerry will be in their usual spots in Section B, Row 3 watching match No. 195 of Sydney’s career on Friday at 7 p.m. when UTRGV (25-6) takes on Houston Christian (23-10). A win advanced the Vaqueros to the second round match at 2 p.m Saturday. Future rounds information is to be determined, but one thing is for sure — however many more matches UTRGV plays, and wherever they are, the Schoens will be there.

“There aren’t many people who can really commit to making it work. They’ve made it a priority in their life,” UTRGV head coach Todd Lowery said. “What makes them special is they’re very knowledgeable about the game but they’re also just supportive in the way you want parents to be supportive. They don’t tie Sydney’s value to when she has a good match. They love to see her compete, they love to see her be part of a team, and I think that gets so lost in today’s culture of youth sports. They just support her in a genuine way and it’s been fun and everybody on our team loves to see them around.” 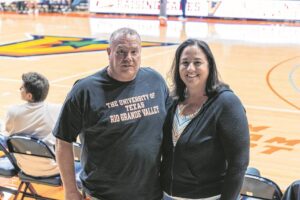 Jerry and Becky Schoen pose for a photo prior to UTRGV’s game against Tarleton on Nov. 12.

Depending on how far UTRGV gets in the postseason tournament, Sydney has one to five matches left in her career. The Schoens don’t like to think about the end, but they’ve always been aware one day this ride would be over. Becky collects something from every match they attend, be it a program, ticket or pencil from the school’s bookstore, and she’s looking forward to organizing all those tokens and reliving the memories that come with them. Jerry said the significance of the last five years will hit them when the journey ends.

“We don’t go on vacations. We don’t drive fancy cars. We live a very modest life. This is what we chose to do,” Jerry said. “We really don’t talk about it ending, but when it’s all said and done, we’re going to go, ‘Whew, we did it. That’s amazing.’ But now, we don’t think about it. We just do it. We always tell Sydney, look in the mirror and ask yourself, have you done everything you can? We have. We’re proud.”

Sydney is proud, too, both of what she has done throughout her career and of her parents for being there every step of the way.

“Now that we’re going to the NIVC and literally any match could be my last, I’m starting to come to terms with my career coming to a close. Coming to UTRGV, I couldn’t have asked for a better way to end my college career, winning the regular season championship and having such a successful season and being on a team I really love and enjoy playing with,” Sydney said. “My parents have made a lot of sacrifices to be at every match and it’s not something that people can say they’ve done before, especially traveling literally all across the country. I’m so thankful for that.”