COLUMBUS, Ind. — The Bartholomew County Prosecutor’s office has filed a formal charge of reckless homicide, a Level 5 felony, against Joseph T. Kidwell, 18, Fowler, in the shooting death Saturday of 18-year-old Jesse W. Bragg, who was a senior at Hauser High School. 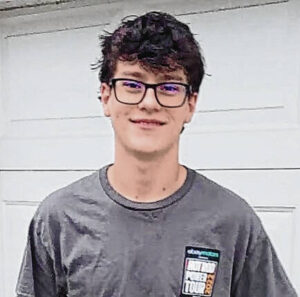 In a probable cause affidavit submitted in Bartholomew Circuit Court, Bartholomew County Sheriff detectives said deputies were summoned to 319 Elm St. in Hope at 9:52 p.m. Saturday about a male being shot.

Hope Police Department officers Joseph Gordon and Bryce Loweth arrived at the home to find two individuals attempting life saving measures on Bragg. The officers took over the live-saving measures until emergency medical services arrived and Bragg was declared dead at the scene, according to the affidavit.

The Bartholomew County Coroner’s office has ruled Bragg’s cause of death as a gunshot wound to the chest and his manner of death as homicide. The probable cause affidavit states the bullet entered the center of Bragg’s chest and exited his left shoulder area, according to the affidavit.

The Hope officers said there were six to seven other people at the residence at the time of the shooting and there were open alcoholic beverages and a green leafy substance with an odor commonly associated with marijuana in plain view inside the house, according to the affidavit.

Loweth secured the weapon used in the shooting, a semi-automatic pistol, which had a round in the chamber and a loaded magazine inserted, according to the affidavit.

Kidwell was read his rights and interviewed at the Bartholomew County Sheriff’s Office where he told Detective Dane Duke that he had fired on shot at Bragg’s chest, but he thought he had an Airsoft pistol in his hand when he did so, the affidavit states.

Two semi-automatic handguns, an IWI Desert .40-caliber and a Taurus PT111 .9mm along with an Airsoft pistol were located and seized at the scene, according to the affidavit. The expended .40-caliber projectile and casing were also recovered, the affidavit states.

Witnesses at the scene told investigators said Kidwell grabbed the pistol, racking the slide and pointed the pistol at Bragg, who was seated on the couch across from him, pulling the trigger one time, causing the pistol to fire, according to the affidavit.