When Brea Hunter competed in a qualifying meet for the International Powerlifting World Championships, she had been competing in the sport for less than two years.

But that didn’t stop the Columbus East graduate from setting a Georgia state record for the Junior 20-23 67.5 kilos (148 pounds) record. The 21-year-old PFC is stationed at Fort Stewart, Georgia, and is part of the US Army Warrior Fitnesss team.

“Those numbers I actually hit pretty easily,” Hunter said. “That’s usually how we do it. We shoot for 10 or 20 pounds under so we have more to gain. I think that we have a good foundation, but this is just a starting point for us.”

Hunter was hoping to shatter those records and win a World Championship last month in Gold Coast, Australia. She was ranked No. 15 nationally, but was No. 1 among the women in her division who were planning to go to the World Championship.

However, Hunter was unable to secure funding and did not make the trip.

“It was a 16-week process that included a qualifying meet, so my coach and I were hoping to go,” Hunter said. “It was frustrating to not be able to see how well I could do in November.” 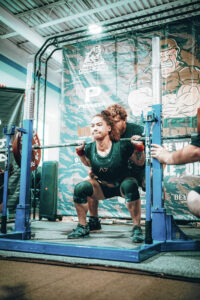 A three-time state club soccer champion, the former goalkeeper gave up that sport after twice dislocating her right kneecap. She began powerlifting as a freshman at Indiana University in the fall of 2020 and competed in her first meet that December.

By July of 2021, Hunter won the Teen III 18-19 69 kilos (152 pounds) national championship in Colorado. She returned to IU last fall, but put here 21st Century scholarship on hold in November and went to Basic Training at Fort Sill. After graduating from Basic Training on Feb. 25, Hunter left for Joint Base San Antonio-Fort Sam Houston, where she began a 16-week Combat Medic School program.

Hunter was inspired by her cousin, US Army Sgt. Jonathon Hunter, who was killed in an attack on a NATO convoy in Afghanistan in 2017 at the age of 23. For her senior project, Brea researched and developed chemicals to be used in QuikClot, a soft, white, sterile, non-woven gauze that contains kaolin that quickly clots blood to control and stop bleeding when applied to an open wound. 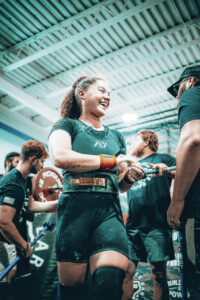 While in Basic Training, a friend showed Brea a flier about the Army Warrior Fitness Team expanding to CrossFit, Powerlifting and Strongwoman, so she applied and was accepted into the program as a powerlifter.

“I just think it’s still exciting that I can be an Active Duty medic in the Army and go to these competitions and go on trips with the team and still do the job I am trained to do, which is being an Army medic,” she said. 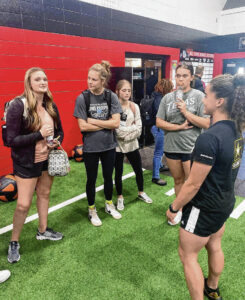 Since joining the Army Warrior Fitness Team, Hunter also been able to travel with Army Warrior Team CrossFit athletes who are stationed at Fort Knox in Kentucky. Earlier this year, they put on a program at a school in Spartanburg, South Carolina.

Hunter, who had one of her photos from the World Championships qualifier featured on the Rogue Fitness Europe website, has Army training coming up the next couple months and doesn’t plan to compete again until next summer. She is hoping to be able to compete in the nationals in July in Las Vegas, and if possible, the World Championships in October or November at a yet-to-be-determined location.

“I’m very excited, given that I haven’t competed since September,” Hunter said. “I’m taking a very long hiatus. Hopefully, it works out, and I can compete, and we put everything together in July.”