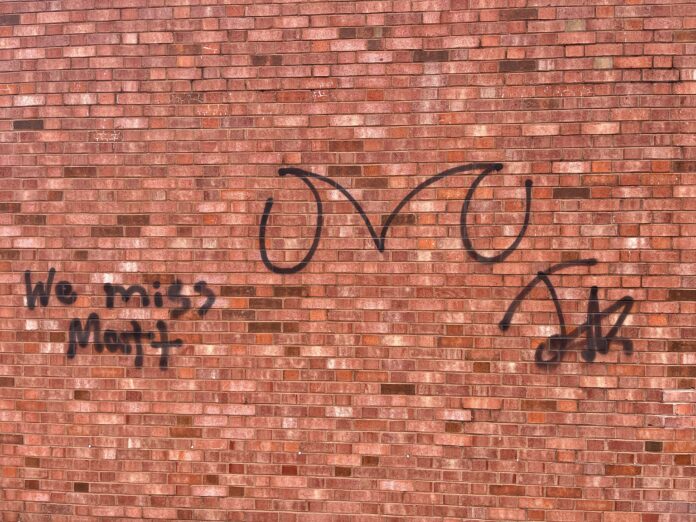 COLUMBUS, Ind. — The Bartholomew County Public Library has been vandalized.

According to library director Jason Hatton, multiple sides of the building have been spray painted with red and black spray paint, with one message that says, “We miss Matt.”

Hatton saw the paint when he went into work Friday morning, and security camera footage indicates that the vandalism occurred in the early morning hours. Library staff will be working to remove the paint and will file a police report.

When asked if the footage gave any clues to who the culprit is, Hatton said, “I don’t believe so. I don’t believe it was anybody we knew, exactly. And I don’t even know ages, anything like that, what it looked like.”

Removing spray paint from a brick building will be difficult, he said. It will probably require a solvent and power washing, and it doesn’t help that maintenance staff will have to work in cold weather.

When asked if the library has ever seen similar incidents in the past, Hatton replied that there was a time when various areas in downtown Columbus were vandalized with spray paint, including the Large Arch sculpture on the library plaza.

The defacing of the famous sculpture on the library plaza on Fifth Street was part of an extensive spray-painting spree discovered in late March 2020. Spray paint was discovered on homes, buildings, vehicles, schools, churches and other spaces.

Three 16-year-old juveniles were detained after images of them were discovered on cameras in the downtown area, one of the teens carrying a spray-paint can and another attempting to open a vehicle door.

Hatton said he doesn’t recall the library building being defaced at that time.

“It’s surprising,” said Hatton. “It’s unfortunate. I just do not understand why people feel the need to destroy other people’s property for fun or for amusement, because it absolutely has an effect, and it’s very frustrating.”