Jackson Fox thought he was done with wrestling altogether.

The Columbus East senior decided to come out for wrestling one final time, and he hasn’t disappointed. He’s been one of the top wrestlers in his weight class and hopes to add a state finals qualification to his resume as the wrestling postseason gets underway with the Jennings County Sectional on Saturday.

Fox began wrestling when he was in elementary school, but went on a hiatus his fifth- and sixth-grade years. He picked wrestling back up in seventh grade and went through his sophomore year. He didn’t wrestle his junior year, but came back as a senior.

Fox opted out his junior year because he didn’t feel like he’d be a full-time varsity wrestler at the time. East coach Chris Cooper mentioned that Fox started back with the program at the conclusion of last season and participated in all of the offseason activities.

“He came out to practice to start the year last year. You could tell he wasn’t into it, and I did my best to change his mind, but it didn’t happen,” Cooper said. “Having spent time away from it, then I think he probably regretted it, especially with the team having the success as they did last year. He just missed wrestling and being a part of it.” 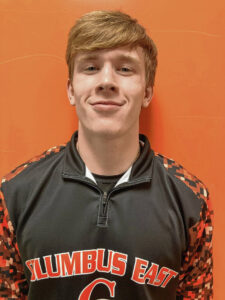 During his time away, Fox started working out two or three times a day and also wanted to put on more weight. He was at 152 pounds following his sophomore year. He’s wrestled at 195 for the majority of this season.

“I was tired of being little,” Fox said. “I was eating so much, and I was working out to build a lot of size and muscle.” 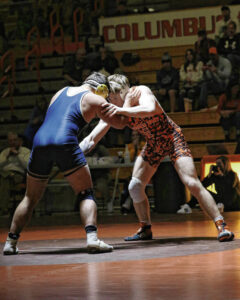 This season, Fox won a Hoosier Hills Conference championship and the East Invitational championship, both at 195.

The sectional bracket for each weight class is expected to be released on Wednesday. Fox will be wrestling at 182 in the tournament. It is usually tough for kids to adjust moving down a weight class, but Fox is ready to handle the challenge that lies ahead.

“I’ll be wrestling some pretty good kids. The ones at 182 move much quicker,” Fox said. “I feel pretty good. I got a couple good practice partners I’m working with right now, and I feel like I’ll do pretty good at sectional.”

“He probably could have been a 182-pounder all year long. We needed him at 195 the majority of the year, so he’s been wrestling up for us,” Cooper said. “He hasn’t said a word about it. He sees the value of contributing to the team. He looks pretty good at that weight. I’m real excited to see what he is going to do in the state series.”

Regardless if his high school career ends at the sectional or the state finals or somewhere inbetween, Fox has learned a lot during his time with the program.

“Definitely being a leader to the younger guys, showing them how to do stuff,” Fox said. “Make them work harder because this (wrestling) room was not a hard room to go soft in. You got to push yourself pretty hard to do pretty good.”