Cole Wright started riding 4-wheelers when he was 4 years old, but a few years ago, he switched to racing dirt bikes.

Wright’s cousins Lane Smith and Doc Smith from Henryville race dirt bikes, and their father Nathan Smith has a training program called The Complete Racer (TCR). Wright often goes down to Henryville on Wednesdays from February through November to train with his uncle, cousins and other riders from southern Indiana and the Louisville area.

“My cousins actually raced dirt bikes, and racing dirt bikes actually seemed like a lot more fun to me,” said Wright, 15, a freshman at Columbus East High School. “They have a course out in there in the woods set up.”

Wright, who races a 2022 KTM 250 XC-F dirt bike, won the D open class championship in the Indiana Cross County Series (IXCR). He won four out of the ten races in which he competed.

“It definitely surprised me a little bit, especially there toward the season winning three in a row,” Wright said. “I was pretty surprised, but I was glad that all my work paid off.” 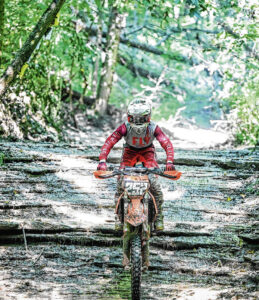 Wright also finished second in points at Stoney Lonesome in Columbus in the first-year adult class. He won two of the five races. 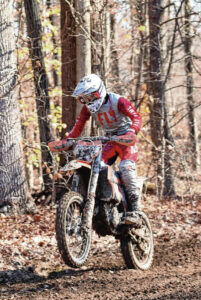 Wright, who lives in Brown County, rides at home a couple days a week. Sometimes when the weather permits, he rides his mountain bike close to six miles on a loop around his home, when he isn’t in Henryville training with his uncle.

“I feel like what I had over everyone else was good endurance,” Wright said. “Training with my uncle, who helps me with that stuff, really helped.”

In September of 2021, Wright broke his leg in a crash at a friend’s house. Dirt got into the leg and resulted in a cyst that doctors had to remove. He had surgery the week before Christmas and recently was cleared to ride again.

Wright’s next IXCR series race will be third week of February in Attica. He will be in same series this year, moving up to B Class, and also compete in a couple events in the Crossroads Racing series.

“My goal this year is to get top three in class,” Wright said. “I’m going to skip the C Class because I could have been top three in that class.”

Wright also wrestled two years at Central Middle School and joined the wrestling team at East this year. He was able to compete in two junior varsity matches prior to undergoing the surgery in December.

Wright is undecided on whether he will continue wrestling next year.

“It’s either doing that or coming up with a winter program for dirt bikes,” Wright said.