She was born on March 10, 1928, in Clarksburg, Indiana, the daughter of Frank and Eloise (Linville) Tucker. She graduated from Clarksburg High School in 1947 and was a resident of Decatur County for most of her life. She moved to Illinois in 2007. Betty had worked as the meal site director for the “Agency on Ageing” for over 30 years and had received the Westport Kiwanis Community Service Award in 1999 for her many years of service to the youth and seniors of the Westport community. She was a member of the Westport United Methodist Church and the Westport Senior Citizens Group. She married Robert D. Wolf on Nov. 26, 1947, at Clarksburg, Indiana, and he preceded her in death June 9, 2007.

She was preceded in death by her parents; husband; granddaughter, Molly Elizabeth Peters; sister, Nora Hoban; and brother, Thomas Tucker.

The funeral service will be conducted at 11 a.m. Thursday, July 7, 2016, at Bass & Gasper Funeral Home in Westport with Pastor Donna Smith officiating. Burial will follow at the Westport Cemetery. Visitation will be conducted from 4 until 8 p.m. Wednesday.

Memorial contributions may be made to the Riley Hospital for Children through the funeral home. Online condolences can be made to the family at www.bassgasper.com. 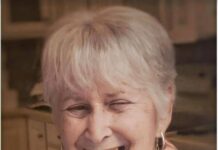