A former Rockcreek Elementary student, whose family had lived in Elizabethtown, has been charged in Ripley County with two counts of murder.

Police say Nickalas Kedrowitz, now 14 and a seventh-grader, is responsible for the deaths of his 23-month-old sister and the 11-month-old son of his mother’s fiance, who lived in the same household.

Nickalas, who lived in Osgood immediately prior to his arrest, has been accused in Ripley Circuit Court with two Level 1 felony counts of murder in the deaths of Desiree McCartney, 23 months, and Nathaniel Ritz, 11 months, court documents state. He is currently incarcerated at a Dearborn County juvenile facility.

Nickalas attended Rockcreek Elementary southeast of Columbus until about 2014. That’s when the boy and his family moved from Elizabethtown to Richmond, and later to Osgood in Ripley County, said the teen’s mother, Christina McCartney.

Nickalas had nearly completed sixth grade when the family left Bartholomew County, less than an hour away from his most recent home in Osgood, she said.

The teen is now undergoing mental health evaluations to determine if he is competent to stand trial in the homicides, with the next hearing in his case set for Dec. 18 in Ripley County, his mother said. Now living in Indianapolis, McCartney said she visits her son at the juvenile detention center once a week on Sundays.

Court documents state Desiree McCartney died after first responders were called to a home in the 200 block of South Maple Street in Osgood on May 1, 2017 about an unresponsive child.

McCartney was living at the home with her fiance, Stephen Ritz, and four children, including Nickalas, Desiree, Nathaniel and Abigail, who was 1 year old, according to court affidavits filed in the case. Nickalas, Desiree and Abigail are McCartney’s children. She was not Nathaniel’s mother, but had been caring for him since shortly after his birth, she said. Nathaniel was Ritz’s child who had full custody of him, she said.

When questioned by police investigators about Desiree’s death, McCartney said she returned home and Nickalas told her that he did not think Desiree was feeling good because she was not talking to him.

Ritz told police that Abby and Nathaniel were crying in the living room and he had asked Nickalas to get Desiree’s diaper and pajamas, as she was taking a bath. After taking care of the other two children, Ritz told police that he returned to the bathroom to check on Desiree and that Nickalas was in tears and told him Desiree had quit breathing.

Ritz initially told police that he performed CPR for five minutes before McCartney returned home, but admitted in a later interview that he had not performed CPR, the affidavit states. McCartney told police she tried to wake the girl up and began performing CPR and called 911, saying Ritz began “freaking out.”

Desiree was taken by ambulance to Margaret Mary Community Hospital in Batesville, and then to Children’s Hospital in Cincinnati prior to her being declared dead, according to court affidavits.

Nickalas told police that Desiree undressed herself and got into the bath by herself, with water up to her chest if she was sitting, or up to her knees if standing, according to the affidavit. Desiree threw up twice while in the bathtub and Nickalas told police he went to get some wipes. When Nickalas returned about five minutes later, he found Desiree floating in the water on her belly, the affidavit states. So he took her out, but she was not responding, the court affidavit states.

An autopsy conducted May 7, 2017 concluded Desiree’s cause and manner of death were undetermined, but the exam revealed a prolonged period of anoxia — lack of oxygen — to the brain, court documents state.

Less than three months later, McCartney called 911, seeking emergency support when Nathaniel was unresponsive in their Osgood home. Her call was placed at 11:12 p.m. July 20, 2017.

Less than an hour later, Nathaniel was pronounced dead at 12:12 a.m. July 21 at the Batesville hospital. Physicians said the child’s heart had stopped about a half hour before emergency medical technicians arrived, court affidavits states.

When family members were questioned, McCartney said the family had eaten supper and then watched television. The affidavit states that at about 11 p.m., she asked Nickalas to take Nathaniel to bed, in a bedroom Nickalas shared with the baby. McCartney told police she went into her bedroom to change clothes.

Within a few minutes, Nickalas told his mother, “Something is not right with Nathaniel, he is not acting right,” the affidavit states.

McCartney picked up the child and took him into her room to change him, then called for Ritz. They decided to call 911 and began performing CPR.

An autopsy was conducted but a cause of death for Nathaniel could not be determined, the affidavit states. The autopsy did not reveal evidence of acute injury, congenital abnormalities or other causes.

After Nathaniel’s death, the family was split up and Nickalas was placed with his uncle, Jeff Barker, who also lived in Osgood, by Indiana Department of Child Services, McCartney said in an interview with The Republic.

Court affidavits state that while Nickalas was at the Barker residence, he was accused in September 2017 of mutilating a kitten, to the point of almost killing it. The Barker family reported that Nickalas had told them one of the kittens was in the basement, and Nickalas was told to get it out of the house. Later, they found Nickalas crying on the front porch with the kitten covered in blood, the affidavit states.

Nickalas told them the kitten had scratched him and he was mad and squeezed it really hard, the affidavit states.

When police learned about the incident, they asked the Barkers for permission to speak with Nickalas, which was arranged for Dec. 13, 2017, the affidavit states.

During the conversation with detectives, Nickalas said he had a conversation with God about Desiree and Nathaniel, but he could not talk about it because he had promised God he wouldn’t tell anyone, the affidavit states. He told the detectives that he had dreams about the two children after they died and began talking about saving Desiree and Nathaniel from Hell and the chains of fire, the affidavits states. Nickalas said he had help from an angel to free them, the affidavit states.

The detectives wrote that Nickalas was crying and kept saying he had to do it, according to the affidavit.

In both cases, Nickalas told detectives he did this to protect them from Ritz, according to the affidavit.

In the interview with The Republic, McCartney described Nickalas as a spontaneous child who was known for helping others during his time at Rockcreek Elementary. He participated in Cub Scouts and Boy Scouts and would help one of the handicapped children on and off a bus at Rockcreek, his mother said. He was also involved in church activities, she said.

McCartney said Nickalas’ interview with detectives, when he made religious references, was not done with her permission or knowledge, and that Nickalas had been watching a witchcraft movie and was parroting information from it with the information taken out of context by the investigators.

She also said that Nickalas expressed to her several times that he wanted to kill himself.

McCartney theorized that Desiree could have had a seizure in the bathtub that resulted in her death, and that Nathaniel might have succumbed to breathing problems caused by his exposure to methamphetamine prior to his birth, she said.

McCartney said she was worried about Nickalas being kept at a detention center rather than at a mental health center, as he was not receiving needed medication and therapy.

“I would not think my son could do these things,” she said of the allegations contained in the court documents. 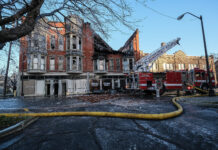 Update: Investigation begins into cause of Fifth Street fire downtown 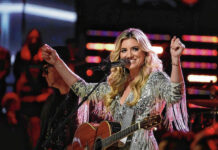 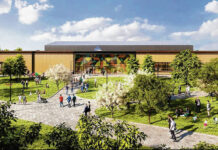