In the opening minute as a starter in his first University of Vermont college game, Josh Speidel took a pass from senior teammate Everett Duncan and went up for a layup to score his first collegiate points on Tuesday night.

But before Speidel took that pass from Duncan, the other three Vermont players on the court touched the basketball. Catamounts coach John Becker said Speidel wanted it that way.

“We talked about just having Everett (Duncan) pass it to Benny (Shungu) and Benny pass it to me because those were my two roommates,” Speidel said. “I went into coach and said, Everett and Benny have been a huge part of this, but this is a team thing. Do you mind if they all touch it?”

So after Albany scored the game’s first points in a prearranged setup, Vermont brought the ball up court and worked it to Speidel, who took a couple of steps and laid the ball in the basket, setting off a loud cheer in Patrick Gymnasium.

“I can’t really put it into words, just being out there for the first time, that emotion,” Speidel said. “But the night wasn’t just about me. It was senior night, and we honored three managers and three other seniors. Those group of guys, (seniors) Daniel (Giddens), Anthony (Lamb) and Everett, I thank them for allowing me to have last night, but the night wasn’t just about me.”

Following his basket, Speidel, a senior from Columbus North, left the game to a standing ovation from the Vermont faithful who had come to watch the Catamounts in their regular-season finale at Patrick Gymnasium. They were treated to an 85-62 win against Albany.

Speidel, the Bull Dogs’ all-time leading scorer, had his basketball career put on hold when he was critically injured and suffered a traumatic brain injury in a car accident late in his senior high school season in 2015. He has spent the past four years on the Vermont team and made his first start on senior night.

“Of course, it was an emotional night,” said his mother, Lisa. “It’s a night that we always believed would happen. When he walked out of the locker room in his warmup, I cried. It’s exactly what I imagined it would look like. Hearing his name when the starting lineup was introduced is exactly how I imagined it would sound six years before his accident.”

Lisa and David Speidel, along with their older daughter Jamie, flew to Vermont last weekend so they could be a part of Josh’s big night. The family members were able to stand under the basket where Josh made his layup.

The play made Josh an instant celebrity, if he wasn’t one already. He and Becker were interviewed by ESPN’s Sports Center Tuesday night, and Josh was on ESPN’s Golic and Wingo radio show Wednesday morning. TMZ Sports also has reached out to Josh, and a radio station from as far away as Seattle was trying to reach him Wednesday afternoon.

David and Lisa Speidel wanted to thank the people of Columbus for all of their support the past five years.

“We’re blessed to be a part of the community,” David said.

“Being a part and seeing the love he had here and still does … so many people came up in tears watching that,” Lisa added. “It was awesome to be there and see how he did it. As he was sitting on the bench (after scoring), it looked like he was at peace with this whole process.” 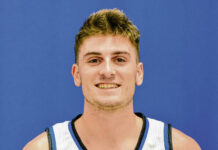 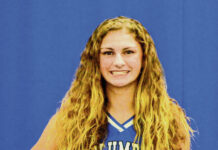