I found Hoosier hospitality at its best at St. Mary-of-the-Woods College recently. A charming place nestled in the woodlands near Terre Haute, this 175-year-old college is an all-girls school and the oldest of its kind in the United States.

It was founded by a small group of French Catholic Sisters of Providence, on a journey from their convent in Ruillé-sur-Loir, France, to the wilderness of Indiana. I was invited to attend the Terre Haute Chamber of Commerce gathering and luncheon at the new Jeanne Knoerle Sports and Recreation Center at the College.

In seeking to “Aspire Higher,” the college offers many opportunities in woman’s education and has expanded access to its undergraduate distance and adult programs to men as well as its campus-based undergraduate program for women only. Through the Woods Online program, both women and men earn college degrees in a wide variety of majors at a pace suited to their lifestyles.

Graduate programs are also offered in a number of programs. Also, St. Mary-of-the-Woods has the only equine program in Indiana and offers a bachelor’s degree in equine studies and is the only college in the nation to offer a music therapy equivalency distance program.

Sports in the new Knoerle Center will include an NCAA regulation-sized gym with all the amenities. The college added its eighth sports team, volleyball, and will compete next fall. Other sports offered are basketball, cross-country, golf, soccer, softball, hunt seat and western equestrian. One of the girls’ teams is called the Pomeroys after a nun named Sister Pomeroy, who played basketball in 1920 at the school.

While at the Chamber luncheon, I had the distinct honor to meet Gene and Donna Griffin, who are involved in the Griffin Bike Park in Vigo County, which will be part of the park system there. The park is in honor of their son, Sgt. Dale R. Griffin, who lost his life while serving in Operation Enduring Freedom in Iraq on Oct. 27, 2009. To remember his love of biking, this will provide much joy and fun to children and adults of Vigo County and surrounding area.

Columbus Signature Academy-Lincoln campus had Fox 59 news anchor Nicole Pence — a Columbus native and relative — visit with the students on Jan. 30. As part of the state standards for students to learn about Indiana history, CSA has come up with a program where Indiana history “living legends” come and speak to the students about making a positive impact in the state and world.

Nicole Pence spoke to the students about her career as a journalist and how they can reach for their goals as they continue their schooling and make a positive impact on their community. The idea of living legends inspired the fourth-grade students by reminding them that at one point Nicole Pence was a fourth-grader sitting in a seat in an Indiana school, just like them. 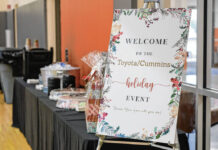