A Cummins Engine Business vice president, a New York CEO and two longtime local volunteers soon will have their names added to those honored on the Wall of Fame at Columbus East High School.

The school’s second Wall of Fame class, which includes two graduates and two honorary inductees, will be introduced during a reception at 6 p.m. Friday and during halftime of the boys home varsity basketball game against Floyd Central High School.

Those being honored are alumni Richard Fields and Jennifer Rumsey and longtime volunteers Frank and Carol Anderson.

Rumsey, who is vice president of engineering in the Engine Business at Cummins Inc., described the induction — and her selection — as an honor.

“My hope is that I can inspire others from Columbus to set high goals for themselves in their lives and careers and that my example will encourage young men and women at East to pursue careers in engineering,” she said.

Frank Anderson said he’s still “not sure it’s completely sunk in yet” that his name will forever grace the wall in East’s main hallway.

The 69-year-old Columbus resident and owner of Frank Anderson Tire said the ceremony will be particularly special for him because it also honors his late wife, Carol, who died in January 2011.

The Andersons’ connection to East dates back more than two decades. When they first moved to Columbus in the 1970s and started Frank Anderson Tire, the high school would ask for tires for the football team to use in practice and drills, Anderson said.

Then when East obtained its first golf cart, Anderson was called over to help fix it, he said.

The couple in 1988 started recording video during every football game, staying up late to make copies for each player, and also recorded games for the girls basketball team, the track team and the softball team.

They became more involved in that after their children graduated — their son, Don, in 1991 and their daughter, Rebecca, in 1998.

Frank Anderson, having earned the title of video coordinator for East football, continues to record video for the football team and sometimes the basketball team.

Now, though, the videos are uploaded to a cloud system for players to watch on their own time, he said. He had to tell the basketball coach he’d be busy during Friday’s game, he said.

During his decades volunteering, he’s come to feel like a teacher or a coach, seeing the children of people he worked with coming through East’s halls now, he said.

Volunteering has been an easy thing to do that’s resulted in an incredibly rewarding experience working with such a tremendous program and the people, he said. The honor of having his name on the Wall of Fame feels like an honor that goes far beyond his simple service to the school, he said.

He said it’s also been heartwarming over the years to see people from all over town get involved at East, something that started happening when families first were allowed to choose between the two high schools.

That led to good experiences for East students including Rumsey, who described her time there as “tremendously positive.”

Rumsey fondly recalled her time in show choir and drama, programs she said helped her make good friends and build valuable skills like teamwork, time management, and being comfortable speaking in public.

Fields, founder and CEO of Juridica Capital Management Limited in New York, was out of town, and his office was unsure if he planned to attend the ceremony.

Fields’ company provides corporations and law firms with economic support for complex lawsuits in business-to-business disputes. He graduated from East in 1974.

The Wall of Fame was the first major undertaking of the Columbus East High School Alumni Association and had its inaugural class last year.

The Bull Dog Alumni Association, which represents Columbus North High School graduates, started its own Hall of Fame and inducted its first class in September 2013, followed by a second class last year.

When: Reception and induction at 6 p.m., followed by a presentation about 8 p.m. Friday during halftime of the varsity basketball game against Floyd Central.

Where: Outside the guidance office at East. Guests should use the main entrance to the high school.

Honorary inductees Frank and Carol Anderson, longtime volunteers: Frank Anderson and his late wife, Carol, began volunteering at East in 1988, attending and recording video during every football game. More than two and a half decades later,  Anderson continues to copy and break games into offense, defense and special teams for each player. In their years of service, the Andersons also recorded video for the girls basketball team, the track team and the softball team. They also both served on the Columbus East Quarterback Club. Frank Anderson volunteers with a group called the Blacksmiths, which builds ticket booths, paints buildings, fixes broken equipment and performs various maintenance services free. He also serves as a senior project judge and mentor. The Andersons did not attend East, but their children, Don and Rebecca, graduated from East in 1991 and 1998, respectively.

Richard Fields, Class of 1974: Founder and CEO of Juridica Capital Management Limited, which provides corporations and law firms with economic support for complex lawsuits in business-to-business disputes. Prior to founding Juridica, Fields was a partner at several major law firms in Washington, D.C., recovering billions of dollars for numerous Fortune 500 clients, including Amtrak, BP Amoco, Phillips Petroleum, General Electric, General Motors Corp., American Airlines and many others. He also founded a company that developed an Internet-based software platform for placing commercial insurance and resolving insurance claims, and an international consulting firm in London that focused on insurance coverage problems for policyholders in the United States and abroad. He graduated Phi Beta Kappa from Indiana University in 1977 with a Bachelor of Arts and from Indiana University Maurer School of Law in 1982.

Jennifer Rumsey, Class of 1992: Vice President of Engineering in the Engine Business at Cummins Inc. Rumsey leads the global technical organization responsible for engineering new products and current product support for engines, which serve a variety of on- and off-highway market applications. Her early career focused on control systems and system engineering, initially at a fuel processing and fuel cell startup company in Cambridge, Massachusetts. She made the move to Cummins in 2000 and has worked in a variety of engineering roles across Cummins’ business units, including advanced technology development, new product development and current product engineering. After graduating from East in ’92, Rumsey received a Bachelor of Science in Mechanical Engineering with high honors from Purdue University in 1996 and went on to get a Master of Science in Mechanical Engineering from the Massachusetts Institute of Technology in 1998. She is a member of the Society of Women Engineers, the Society of Automotive Engineers and the Women in Trucking Association. 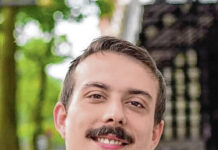