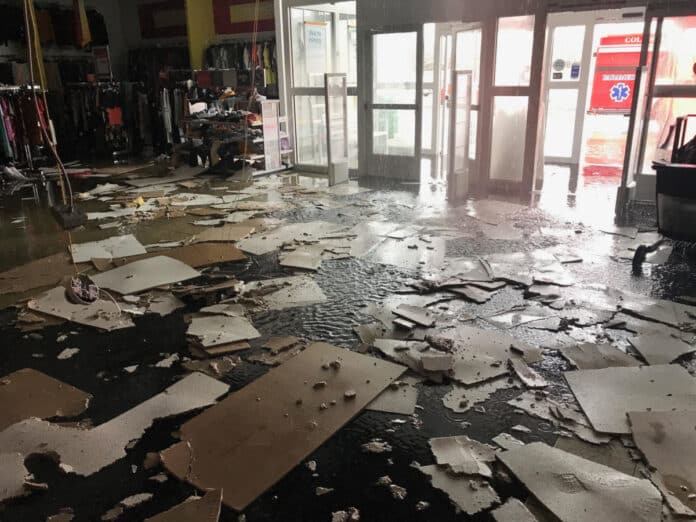 A faulty sprinkler head is believed to have caused a serious flood in the entryway of Kohl’s in Columbus Saturday afternoon, resulting in the store having to close.

Columbus firefighters were sent to the store at 2:44 p.m. Saturday about a fire alarm and a report that a manual pull station was activated, said Capt. Mike Wilson, Columbus Fire Department spokesman.

When firefighters arrived, they found an activated sprinkler head discharging water near the cashier area.

A large volume of water was released from a single sprinkler head located above a drop ceiling, Wilson said. The water flow caused portions of the drop ceiling to collapse to the floor, and showered water on merchandise racks near the cashier area.
The entrance area floor was flooded with approximately one half inch of water, Wilson said. Firefighters reduced additional flooding by turning  off the water flow to the sprinkler system. The store also has a sprinkler system located within the drop ceiling which had not activated.
Due to  water contacting electrical system components located above the drop ceiling, firefighters also turned off the electric service to the building. The store will remain closed until damages can be fully assessed and repairs complete, Wilson said. Representatives of Kohl’s told investigators they believed the store may be closed until early next week.
Investigators believe the incident occurred as a result of a faulty sprinkler head.
No injuries were reported at the scene. No damages assessments were provided.
For more on this story, see Sunday’s Republic.