James Iven Richards was born on November 22, 1931, the son of Iven and Lona Richards. He grew up with five sisters in Brown County and then Martinsville, Indiana, where his father was Chief of Police. He was fourteen, a basketball player at the time, when he contracted polio and could never walk again without using metal crutches. But he didn’t let that stop him. He modified cars so he could drive just using his hands, refused to use handicap plates or park in handicapped spots, and refused to use a wheelchair for almost seventy years.

After surviving quarantine in the Riley hospital polio ward, he finished high school and then put himself through college, earning a degree in accounting at Indiana University, while working as a police dispatcher in Martinsville, all the while relying on crutches for his mobility.

Upon graduation, “Jimmy” became a certified public accountant and joined the accounting department of Cummins Engine Company in Columbus, Indiana where he rose to the level of Assistant Secretary/Assistant Treasurer, retiring at age 55.

In 1954 Jim married Shirley Ellen Shields of Martinsville, and raised two children, Jef and Mark, in Columbus, Indiana. Jim and Shirley would have celebrated their 67th anniversary next month. In the 1970s they, along with business partners Barney and Marilu Carr, bought and operated the Columbus Village Apartments (now called Townhomes).

Jim and Shirley were long time members of First Christian Church in Columbus, where some of their strongest friendships were formed. They, along with the Carrs, created an endowment to support the Church’s music program. Jim was also the Treasurer, a Deacon and an Elder at the Church.

Jim was a fan of the basketball and football programs at Indiana University, as well as of the Indianapolis Colts. He loved dogs, especially English Bulldogs. Above all else, he loved his family and was devoted to them.

In lieu of flowers, the family requests that donations be made to the First Christian Church Music Fund, 531 5th Street, Columbus, IN 47201.

Services will be Saturday, February 27, at the First Christian Church in Columbus. Funeral will be held at 1:00, with viewing beginning at 11:00 am. Masks are required, and social distancing will be observed.

Arrangements were entrusted to the Jewell-Rittman Family Funeral Home, Columbus, IN. 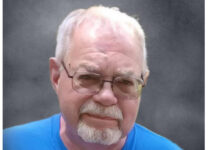