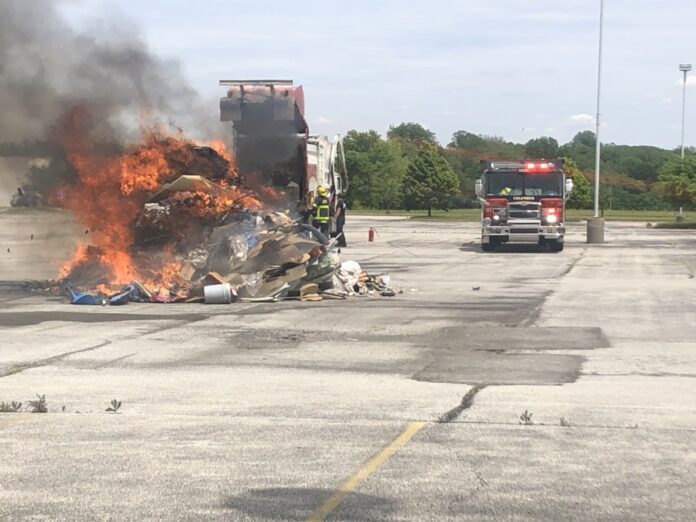 Columbus firefighters extinguished a fire in a trash truck after the vehicle was reportedly on fire near the AMC Theater parking lot at 2:40 p.m.

Firefighters were sent to the movie theater parking lot where they found a Rumpke Waste and Recycling compactor truck had dumped a load of trash on to the vacant parking lot, said Capt. Mike Wilson, Columbus Fire Department spokesman.

The waste material was on fire, as was the truck and debris inside the truck, Wilson said. They first extinguished the flames in the truck and then moved on to the debris pile.

The Columbus Department of Public Works was called to assist at the scene with a front end loader.

A Rumpke employee told firefighters that he saw smoke billowing from the truck when he was about a mile away from the parking lot, Wilson said. Suspecting the load was on fire, he told firefighters he was looking for a safe, open area to possibly dump the load. The AMC parking lot was empty and he made the quick decision to choose that location to prevent additional damages or any injury to the public, Wilson said.

The cause of that fire is under investigation. Damages to the Rumpke vehicle are suspected to be minor.  No injuries were reported, Wilson said.