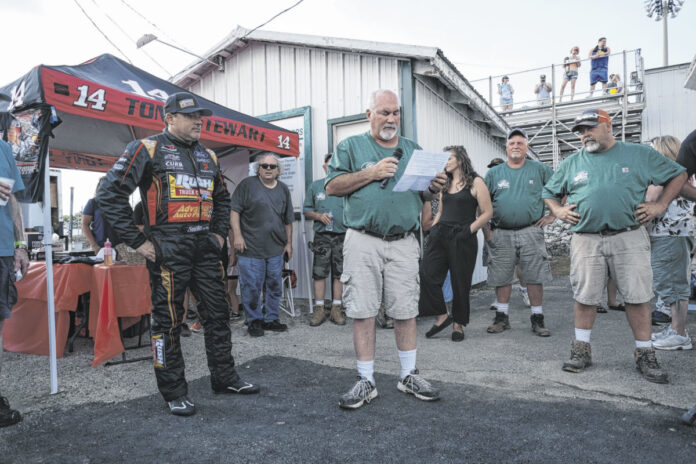 Just after the tarp on the pagoda at Bartholomew County 4-H Fairgrounds was removed to reveal it’s new name of “Tony Stewart Speedway” Tuesday  evening, the man for which it was named had a question.

“I just want to know if I get keys to it so I can practice whenever I want now,” Stewart joked.

The three-time NASCAR Cup Series champion and Hall-of-Famer got his start at the fairgrounds when he was 8 years old. He has gone on to become the only driver to win titles in stock cars, Indy cars, open wheel midgets, sprint and Silver Crown cars.

In 2003, Stewart started Tony Stewart Foundation to benefit chronically ill and physically disabled children, animals that are endangered or at risk and drivers injured in the sport of racing.

“Tony Stewart has proven to be a winner both in and out of the drivers seat,” fair board president Rick Trimpe said. “We would like to thank Tony for all he’s done for the race and for our track here at the Bartholomew County Fairgrounds.”

Stewart remembered when he was a kid when the current pagoda was at the old 25th Street Speedway when the Fairgrounds was there.

“I remember as a kid when it got moved down here how excited we all were to bring the history of the Bartholomew County Fair and the fairgrounds coming out this direction, but to have this pagoda here, and now to have my name on it with ‘Speedway’ underneath it is a huge honor,” Stewart said. “I greatly appreciate the fair board.”

For the complete story and more photos, see

Local man arrested on warrant for felony dealing in methamphetamine