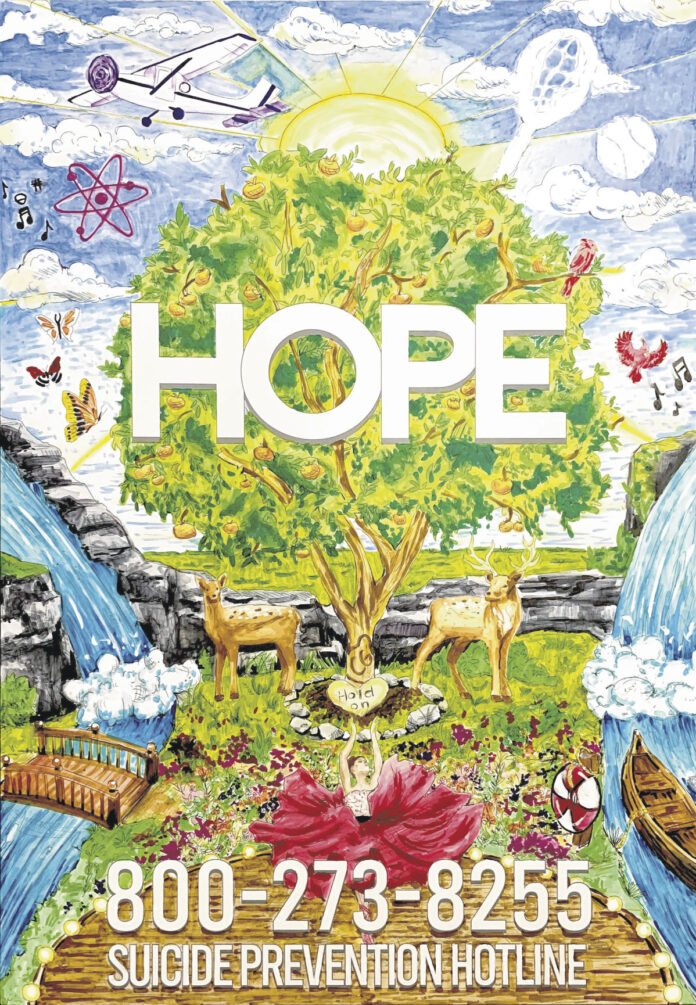 A Franklin artist has created, with some help from a local counselor and students, artwork memorializing a local retired teacher who died in March.

Carole Goshorn died March 3, 2021 at Greentree Senior Living Community where she had lived with her husband Gary for the past year. This followed her 15-year journey with Alzheimer’s disease.

Carole, 69, was a member of St. Peter’s Lutheran Church, a school volunteer and an award-winning former teacher for the Bartholomew Consolidated School Corp. One of the causes that her family requested donations be made to, in lieu of flowers, was the Hope Squad chapter at St. Peter’s Lutheran School.

“Her illness progressed by the time Hope Squad actually started, but she was a volunteer here,” said school counselor and Hope Squad advisor Violet Dickerson. “And she would sometimes sit in the coffee area, and she would do her needlework. And kids would come by and say hi. So I think she definitely had a love for kids and a love for helping. And I know if she were around and she was healthy enough, I’m sure she would love helping with Hope Squad.”

Hope Squad, which is a suicide prevention program, received a couple thousand dollars in donations in memory of Goshorn, she said. Some of this has been used to pay for artwork memorializing Carole and promoting hope. The number for the National Suicide Prevention Lifeline is included in the artwork.

A framed version (without the number) will be presented to her widower, Gary, for the first time at St. Peter’s on Sept. 9 at 8 a.m. A copy will be presented to CSA New Tech at 10 a.m. on the same day, which is part of National Suicide Prevention Week (Sept. 5 through 11).

Dickerson will be reaching out to other schools, and the plan is for copies of the print to be given to local middle and high schools. The original might hang at St. Peter’s, she said.

Franklin artist Whitney Kay Rader said she designed the piece on her computer and drawing tablet, then printed it out onto a poster. She and some Hope Squad students used alcohol-based markers, similar to watercolor markers, to color in the design.

“They’re just a really great group of kids,” she said. “… They seemed really just good and kind and wholesome and helpful. So I just really appreciated all that the teachers do there for the kids and for the kids themselves.”

Dickerson said that she collaborated on the artwork by interviewing Gary about Carole’s life and passions, and the piece contains references to her interests. These include a dancer, a stage, a scientific symbol, animals and nature. The scene also shows Carole’s initials carved into a tree and a life preserver, which is the symbol of Hope Squad. The word “HOPE” is also there in bold letters, as well as the hotline number.

“Gary’s wish, of course, was to help as many people and kiddos and students as we can,” Dickerson said. “So we felt like something that was there, that was beautiful and honored Carole but also had that number on it, might be helpful.”

She also said that part of the vision for the piece is that students might notice something different about it each time, as well as the “message of hope” and the hotline number.

“I hope it just reminds them that there’s a lot of beauty still in the world, even amidst things that can often seem dark, and that there’s always hope and light ahead,” Rader said.

Lori Borgman: Are you pumped for pumpkin spice?