HOPE — Flat Rock-Hawcreek School Corp. has reached a tentative agreement with its teachers’ association that, if ratified, would collectively raise salaries about 10% over two years.

The association’s co-presidents, Andrea Reed and Julia Swegman, said in a joint statement that this is “the largest raise we have bargained in recent memory.”

The Flat Rock-Hawcreek Teachers’ Association has 61 teachers in its bargaining unit.

The school board had a public hearing regarding the tentative agreement on Tuesday night prior to their board meeting. Superintendent Shawn Price said that the board plans to ratify final terms of the contract on Oct. 25, and changes made before then will be “minor” and not have any financial impact. If approved, the agreement is effective from July 1, 2021 to June 30, 2023.

According to the agreement, current teacher salaries range from $37,250 to $68,050. If the contract is approved, salaries will range from $40,000 to $72,000 during the 2021-22 school year. Reed and Swegman said the change will make the school corporation “more competitive with surrounding schools.”

“In an attempt to have a greater impact on our salary schedule, specifically our starting teacher salaries, an increase of $2,750 to every step on the scale will be done in year one,” Price said in a statement. “Year two will see another $1,000 bump to the scale, making the starting and top salaries $41,000 and $73,000 respectively in the 2023 school year.”

Additionally, all teachers with an “effective” or “highly effective” rating who completed the 2020-21 school year at Flat Rock will move up one step on the salary scale in 2021-22, which means a $1,200 increase. Therefore, a teacher who was with the school corporation last year and qualifies would see a total salary increase of a little over $3,900 this year, Price concluded.

He said that the contract represents a collective increase of 8.3% in its first year and another estimated 2% in the second year for a total of 10.3%.

“Teachers are pleased with the new contract and voted overwhelmingly to approve the contract,” said Reed and Swegman. “We would like to thank Mr. Price, the bargaining team, and the board for a very respectful and productive bargaining session.”

The bargaining was fast-moving, and the school corporation and the association had “similar goals,” said Price.

He also stated that the school corporation will provide one-time contributions to HSA accounts. The payments are $500 for family plans and $250 for single plans.

Any funds forfeited by teachers who are not eligible for an increase will be divided equally among qualifying teachers and paid as a one-time stipend.

In addition to discussing the tentative agreement, Price recommended a 5% raise for all non-certified employees and administration. The raise is for the 2021-22 school year and will be retroactive to the first day of school. This increase, which does not include Price’s position, was approved by the board. 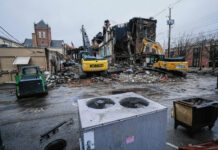