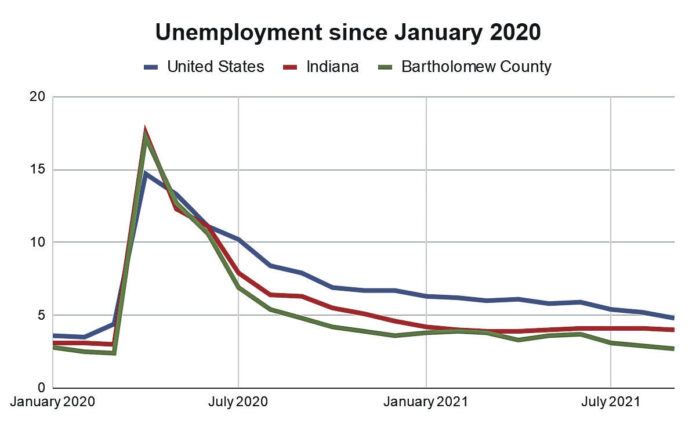 Unemployment in Bartholomew County hit a new pandemic low last month, according to figures released this week by the Indiana Department of Workforce Development.

In September, the jobless rate in Bartholomew County stood at 2.7%, down from a revised 3% the month before — the lowest rate since March 2020, when unemployment was 2.4%.

Similar declines in unemployment were reported in neighboring counties.

The jobless rate in Jackson County declined from 3.1% in August to 2.9% last month, state records show. In Jennings County, unemployment was 3.5% in September, down from 4% in August.

However, Bartholomew County workers have continued to file for jobless benefits at higher rates than in the years leading up to the pandemic, and nearly 500 fewer people were in labor force last month compared to February 2020, according to state records.

A total of 66 Bartholomew County workers filed initial unemployment claims the week ending Oct. 16, down from 163 the week before.

By comparison, an average of 29 workers in Bartholomew County filed initial unemployment claims from 2015 to 2019.

Overall, 166 Bartholomew County workers were drawing jobless benefits the week ending Oct. 9, the latest data available, and up from 50 the week before.

The update from the Indiana Department of Workforce Development came just days after the federal government reported that the number of Americans applying for unemployment benefits fell to a new low point since the pandemic erupted, The Associated Press reported.

Unemployment claims dropped 6,000 to 290,000 the week ending Oct. 16, the third straight drop, the Labor Department said this past Thursday. That’s the fewest people to apply for benefits since March 14, 2020, when the pandemic intensified, according to wire reports. Applications for jobless aid, which generally track the pace of layoffs, have fallen steadily from about 900,000 in January.

Unemployment claims are increasingly returning to normal, but many other aspects of the job market haven’t yet done so, according to the AP. Hiring has slowed in the past two months, even as companies and other employers have posted a near-record number of open jobs.

Yet so far, that hasn’t happened. Instead, some observers are starting to consider whether some of those who had jobs before the pandemic, and lost them, may have permanently stopped looking for work.

The Labor Department’s report last week also showed that the number of people receiving jobless aid nationwide continued to decline, according to wire reports. During the week of Oct. 2, the latest data available, 3.3 million people received unemployment benefits, down from 3.6 million in the previous week.

A year ago, nearly 24 million people were getting unemployment aid.