Last year was a breakthrough season for the Columbus North and Columbus East boys swimmers.

The Bull Frogs qualified all three relay teams to state for only the second time in 19 years, and the Olympians sent swimmers to state for the first time in 13 years. Both teams will look for similar production when the postseason rolls around in February.

Here is a look at those two boys swimming teams, as well as Jennings County:

Brett Findley has stepped in as interim coach for the Bull Frogs after Logan Schaefer left to take a position with the Mason (Ohio) Manta Rays. Findley has 29 boys out for this year’s squad.

“They’ve been doing well,” Findley said. “We some great upperclassman leadership, but lots of depth at the lower levels, as well. We have some swimmers who have come back after not having swam for a couple of years.”

Junior Daniel Utterback qualified for state in the 200- and 100-yard freestyle events, as well as a pair of relays. Senior David Fry swam on all three state-qualifying relay teams, while senior Matthew Goble was on two of them and senior Carlos Fabian Aguilar and junior Pratt Badve each were one one.

“I’m definitely going to count on those guys,” Findley said. “Even these first couple weeks, we’ve had guys going at their fast times just by upping their training.”

“This group has tons of potential,” Findley said. “We have a really strong sophomore class. It’s just getting them to realize that they’re capable of quite a bit.”

The Bull Frog boys and girls open their seasons today at home against Franklin.

”(Today) is going to be a really big test for us to see where they’re at,” Findley said. “They’re fired up, and I’m happy for them.” 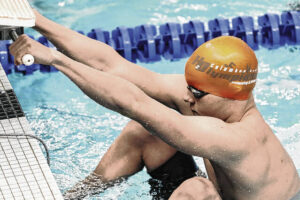 The Olympians made a huge leap forward last season, finishing second in the Hoosier Hills Conference and setting three school records while taking fifth in the North Sectional. Most of the top swimmers from that group are gone, but second-year coach Doug Trueblood is happy with what he’s seen.

“They’re looking good,” Trueblood said. “I’m kind of anxious to see how we do. The goal is to improve over last year and build on the momentum from last year. We lost some key pieces, but we have some good young guys coming in. I’m anxious to see how some of these guys step up and fill the void.”

Senior Dathan Wolf, who swam the backstroke leg on East’s state-qualifying 200 medley relay team, has committed to swim at Valparaiso. He is the only senior on the team.

The other top returners are juniors Spencer Erfmeier and Rylan Perkins and sophomores Judah Nickoll, Cavan Stilson and Jesse Isaacs.

“I feel like we have a good group of returning kids coming in,” Trueblood said. “Those guys have made some really big strides through club, and I’m excited to see how they continue to grow and improve.”

“It will be really interesting to see how those freshman step into the high school season and grow with the team,” Trueblood said. “So far, they’ve been doing a really good job of training and fitting in with the culture of this group.”

Junior Brady Beyer, who finished 13th at state in the 500 freestyle and 16th in the 100 breaststroke, moved to California to train, but has left the door open to the possibility of returning to East after Christmas.

“We’re just not sure yet,” Trueblood said. “We’d be glad to have him back, but we want Brady to do what’s best for him. He still has some time to make that decision. He’s been swimming well out there, and I’m just super happy that he’s doing as well as he is right now.”

The Panthers have new coaches in the husband-wife duo of Jeff and Dea Jones, who were assistant coaches last season.

Jennings has nine boys on the team, up from seven last year. Juniors Noah McFall, Levi Marsh and Jonathan Jones are the top returners.

Sophomore Brock Lane and junior diver Rylan Campbell also are back. Senior Greyson Jackson is swimming for the first time in his high school career, while senior Lane Elsner and freshmen Brock Maschino and Preston Harriman are new to swimming

“When you have a small team like that, everybody brings their own skills to the table,” Deb Jones said. “Swimming is one of those things where it takes awhile to get your skill built up, but we’re seeing some good times already. I think it will be a good season.”

The 2021 boys swimming schedules for Columbus East and Columbus North: