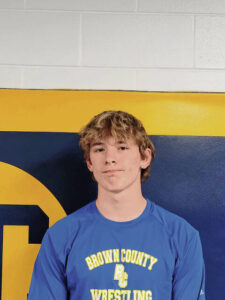 Luckey won by decision at 152 pounds in the Eagles’ 51-13 loss at Scottsburg and won by pin in a 24-12 victory against Southwestern (Hanover) on Saturday.

His performance last week: “It was good to get back on the mat. I felt pretty good. It was a good start.”

Do you do anything special to prepare? “I usually just drink Body Armor.”

Best advice: “Go into every match with a 0-0 mentality (from former assistant coach Jeff Mullins).”

Athletics goal: “To make the semistate.”

If you could travel anywhere: “Probably Alaska. It’s always interested me.”

Her performance last week: “It was very good wins for the team, and I think that we have improved. So just to go out there and prove that we are good is what we’re looking to do.”

Do you do anything special to prepare? “I just make sure that I’m focused, and I eat a granola bar before every game.”

Best advice: “Be willing to be the difference-maker in a game, and do anything you can to help the team win.”

If you could travel anywhere: “Hawaii, because I’ve never been there, and I just think it would be lots of fun.”

The Dual Threat: North’s Hammons is The Republic Football Player of the Year