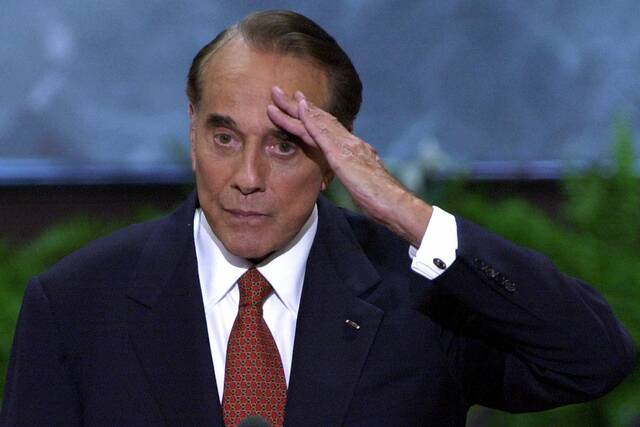 We offer condolences to his wife, Elizabeth, his family, and the many friends and colleagues he met over a full lifetime of service to his country.

There can be no doubt the Russell native will be remembered as a titan of 20th-century American government.

At the same time, Dole’s legacy extends beyond his many accomplishments in Washington or his resume. He remains important in our time. His tireless effort to find common ground with political opponents is more critical today than it was when he left elected office in the 1990s.

Dole was not born to wealth — his family ran a small cream and egg business in Russell, Kansas, where he went to high school. After graduation, he enrolled at the University of Kansas.

World War II intervened, however, as it did for millions of Americans. Dole joined the 10th Mountain Division of the U.S. Army, where he served as a second lieutenant.

The wounded veteran returned to the United States, where he began a grueling four-year struggle to regain his health. Famously, friends and neighbors passed a cigar box to help pay for his care.

Dole’s war injuries deeply informed his life in public service. Through his rehabilitation and setbacks, he developed an iron will, a sometimes caustic sense of humor, and an understanding that no one truly walks alone in this world. Sometimes you need help.

“I had a more optimistic view of the human race,” he later wrote. “Having benefited from an extraordinary outpouring of affection and support, how could I feel otherwise?”

At times, Dole’s optimism could be hard to find.

As his career developed — state representative, county attorney, the U.S. House, the Senate — Dole’s reputation for sometimes heated partisanship grew. He was called a “hatchet man,” a caricature that contained a stubborn grain of truth.

In 1980, Americans overwhelmingly elected Ronald Reagan as president, and put Republicans in charge of the U.S. Senate, Dole among them.

Mainstream conservatives remember the Reagan years as the pinnacle of their movement. Yet Dole’s essential role should not be overlooked: The Kansas senator, more than anyone, was responsible for the tax cuts of 1981, the 1980s rescue of Social Security and myriad smaller accomplishments of Reagan’s terms in office. He ran for president unsuccessfully, getting closest in 1996, when he lost the general election to Bill Clinton.

America mourns Bob Dole. We remember the man who worked as a private citizen to honor fellow World War II veterans. We think of the man who tried to extend disability protections to the world.

We mourn an elected official who understood responsibility — for a neighbor, a friend, a constituent, a country. We mourn the loss of that understanding in our politics.

We mourn the disappearance of compromise.

“The American people are looking at us,” he said in his final Senate speech. “And they want us to tell the truth.”