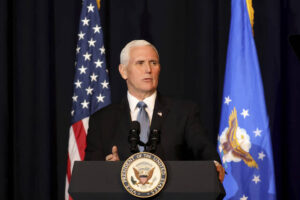 Former Vice President and Columbus native Mike Pence has a story to tell about the events of Jan. 6 — and what led up to them — from a unique perspective. He should tell his story fully, candidly and honestly to the House committee that is investigating the deadly events of one year and one week ago at our nation’s Capitol.

The committee has indicated it wants to hear from Pence. It should, and so should the American people.

What Pence has to say is vitally important to understanding what happened in Washington on Jan. 6, 2021. His testimony is crucial to establishing a complete record so that no similar attempt to undermine democracy can ever happen again.

We cannot overstate this: Pence was the fulcrum upon which our democracy balanced on that fateful day. His was a traditionally ceremonial role — he was to oversee the certification of the November 2020 election, in which Joe Biden won the presidential election by a margin of more than 7 million votes, and the states had certified that he won the Electoral College by a margin of 306-232.

But as has become clear, Pence faced a nefarious, orchestrated scheme, and a tsunami of pressure, to do something no other person in his position has ever done in the history of the country. Pence was pressured to reject the certification of the election.

On Jan. 6, 2021, a violent mob ransacked the Capitol, disrupting what throughout our history had been a peaceful transfer of power. The rioters did this after Pence had indicated that he would uphold his oath and not bow to the pressure. A campaign of intimidation followed, culminating with looters and insurrectionists roaming the corridors of Congress, many screaming, “Hang Mike Pence.” A makeshift gallows rose in the mayhem outside our Capitol.

This looked nothing like the United States of America. This was an attempted coup, with far too many persuaded to seize power by any means necessary, including through deadly violent force. In the hours that Pence and lawmakers fled an invading mob, an uncertain nation watched a surreal scene in real time. Our democracy was enduring an existential crisis.

What Mike Pence has to say now is more important than anything he has ever had to say as a national figure. He showed brave determination to carry out his constitutional duties on Jan. 6, 2021, after the insurrectionists were finally called off and Congress returned to preserve our democratic bedrock, our peaceful transfer of power.

Now, Pence owes a duty to history and a duty to the American people. His unvarnished telling of the events of Jan. 6, and the days that led up to that day, from his personal perspective, is essential. The committee, and the American people, need to hear from Pence what he went through, what he was being pressured to do, and anything else the former VP feels is important to share for the record.

Pence should feel no compunction about speaking to the committee, and it’s been reported that his aides are cooperating. That’s commendable.

However, the bottom line is, any conclusions the committee, and the American people, may draw about Jan. 6, 2021, will be incomplete without hearing from Pence, in his own words.

Hakim-Shabazz: Yes, I got shot — booster, that is

Bud Herron: Judging by symbols, we should be careful