McLean had two doubles and two RBIs in a 9-6 win at Southport, hit a two-run game-tying home run in the top of the seventh inning of a 5-5 tie Friday at Cathedral and had three hits, including two doubles, and three RBIs in Saturday’s 14-4 win at Terre Haute North.

His performance last week: “Our team did pretty good. We were pretty solid last week.”

Do you do anything special to prepare? “I always listen to music on the bus and take a nap.”

Best advice: “From coach (Pat) Antone, ‘Stay positive, and think good about everything, even if it’s bad.’”

Athletics goal: “I want to get committed (to a college) for baseball.”

If you could travel anywhere: “I want to go back to Australia because the last time I went there, the Great Barrier Reef was awesome.” 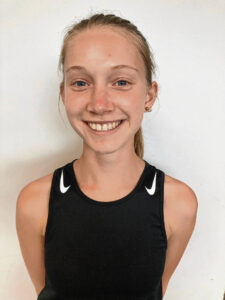 Her performance last week: “I wasn’t entirely expecting to run that fast, but I’m happy that I did.”

Do you do anything special to prepare? “It’s really just getting in the right mindset of being serious, but not too serious and having an enjoyable mindset and enjoying the meet atmosphere.”

Favorite drink: “I drink a lot of water.”

Favorite athlete: “Shalane Flanagan. She’s had some cookbooks that I have.”

Role model: “My mom (Jennifer Rumsey). She’s shown me that whatever you want to do, you can do, regardless of your gender.”

If you could travel anywhere: “Italy, because it’s just really pretty over there, and the food is really good.”