The big prize for the Columbus North boys track team lies a couple weeks in the future, and the first step in putting itself in position for that prize comes today on the Bull Dogs’ home track.

Top-ranked North hosts the sectional beginning at 5:30 p.m. today. The Bull Dogs will be aiming to put as many athletes as possible through to next week’s Greenfield-Central Regional with an eye on the June 4 Boys Track and Field State Finals, where they will be one of the favorites to win the team title.

As for today, North figures to battle with No. 6 Center Grove for the sectional title.

“We match up really well with Center Grove,” North coach Rick Sluder said. “It will be us competing with them again for the team title, probably.”

The Bull Dogs are ranked first in the state in all four distance events, including the 800 meters, where they have the state’s top three times. Senior Tucker Smith has the all-time state record in the shot put and is ranked third in the state in the discus.

Senior Reese Kilbarger-Stumpff has the season’s fastest outdoor times in the 1,600, 800 and 3,200, although he likely will be able to run only two of those events in the postseason. Senior Matt Newell and junior Mateo Mendez are ranked second and third in the 800, and the Bull Dogs have the state’s top time in the 4×800 relay and third-best time in the 4×400 relay.

“I think we’re going to get a lot of people through to the regional all up and down our lineup,” Sluder said. “Obviously, Tucker should be at the top of both throws. Our sprints have been coming on. I think all three of our relays are going be right at the front, and then of course, we’ll be distance heavy.”

Columbus East senior Anthony Lloyd is seeded first in both the high jump and long jump. The Olympians are third in the 4×100 relay.

East is expecting to have back junior sprinters Ethan Duncan (hamstring) and Devon Tekulve (calf strain) after both have missed the past few meets with injuries. 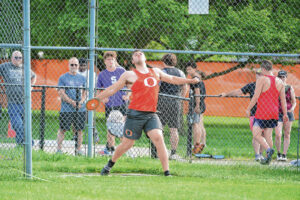 “We have a few of our athletes that have a pretty good shot,” East coach Jerone Wood said. “If we can get some big performances from (Jacob) Guse and get him to PR, he can put himself in a good position to get him moved up. Anthony is in a pretty good position, so he should do pretty well. Then, I’m looking at our relays, and we have a good shot with our 4×100 and our 4×400. That, of course, is dependent on the health of Ethan Duncan. Rocco Duffy in the 200, if he runs his best race, which he’s able to do, he has a shot, as well. Then, Charlie Russell, if he can hit his peak, has a shot in the (110) hurdles.”

Hauser’s Aleck Lopez is seeded second in both the long jump and 100.