Columbus resident Eric Riddle prays best when his legs flow with his thoughts, moving rhythmically with his breathing.

That, in part, explains his attraction to labyrinths — circular mazes of sorts that curve and wind to a center while giving those traversing its paths quiet time to think, contemplate or pray. In fact, on a figurative level, Riddle’s walking ‘round and ‘round keeps him from going in circles in his spiritual communication.

“They allow me to get into a prayerful state,” Riddle said. “Some people prefer to pray on their knees, and some like to pray in a very private space or place. But, for me, one of the most powerful ways to pray is walking a labyrinth.

“It makes it easier for me to get into a nice breathing rhythm.

“And here we are amid COVID talking about something that can provide people an outdoor, sacred space, giving people a different opportunity for a kind of worship.”

He and wife Jen have followed labyrinth paths in probably seven states, with the help of the internet, thus far. And, by perhaps the end of June, the Riddles and others at Columbus’ First United Methodist Church would like to invite others along the literal path.

The church just installed a not-yet-ready-for-the-public labyrinth, 60 feet in diameter, on its grassy property at Ninth and Lafayette streets downtown. Hay has been laid so grass gradually can grow between the bricked rows. Planners expect to open the labyrinth for use in late June.

Labyrinths, circles of paths all leading to the center, date to at least 3,500 years ago. Some date to the 13th century in locales such as France, where they are etched into cathedral floors, according to historians. People have used them for reasons ranging from simple relaxation to complex prayer.

Besides churches, hospitals have installed them. At North Christian Church, an indoor labyrinth once was open regularly in its lower level and, a decade ago, one was created on its lawn. Labyrinth creator/builder Warren Lynn, an ordained Disciples of Christ minister, helped make that one on the North Christian lawn and also shaped the latest one at First United Methodist. He regularly walks a labyrinth at a school near his Indianapolis home.

“It’s a part of my own meditation — a part of taking time out, getting still, and listening to life, to faith, to God,” Lynn said. “It helps me stay centered.”

Plus, he uses what is known as a hand-held, finger labyrinth at his desk at times, where he traces the quick respite of a spiritual journey with his digits.

“There has definitely been a renewed and sustained interest in the past 20 to 30 years,” Lynn said. “I think they speak to many people’s understanding that life is a journey. And within that context, a labyrinth offers a fairly open interface through which folks can bring their own understanding of life and faith, and use this as a tool to empower their own living.”

Riddle mentioned that part of the original thought behind the labyrinth area was to make the grounds there “kind of a what some people call a pocket park, in which you take a nice, green space and turn it into an area for public gatherings.”

However people interpret the labyrinth, Riddle offered a humorous bit of insight among his serious perspective. He referenced the 1986 Muppet movie-turned-cult-hit “Labyrinth,” starring the late pop star David Bowie. The teen girl in the flick is told she must “solve” a winding labyrinth before she can save her stolen baby brother from the evil Goblin King.

“This isn’t like David Bowie’s labyrinth,” Riddle said with a chuckle. “You don’t have to make a decision on which way to go. In these type labyrinths, you can journey to its center and leave the world behind, so to speak, wrestle with whatever you need to wrestle with, and then, after prayer, come out of the labyrinth with just a little more clarity.” 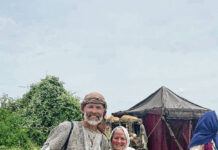