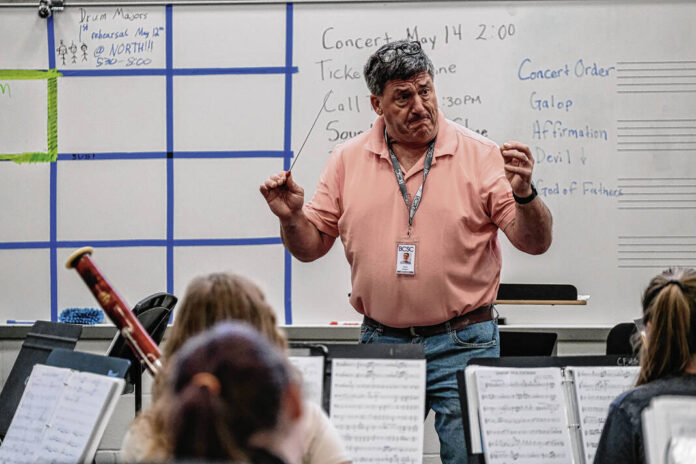 “I keep saying this to my kids when we talk to kids about it: ‘Last time I checked, I’m not a geek. I’m a pretty smart person, and I’m pretty musical, right? And there’s a difference,’” he said.

Still, Rodgers has heard the term several times over his 30-plus years of teaching. Friday marked his last day as director of bands at Columbus East High School and Central Middle School before moving on to retirement. Casey Mitchell has been hired as his successor.

Rodgers’ teaching career spans 34 years, with the last 22 taking place in the Bartholomew Consolidated School Corp. He was initially hired at East, with his role at Central added later on.

Rodgers credited his high school and middle school directors with helping foster his love of band. His parents also enjoyed music and gave him piano lessons.

“Music was early in my life and often,” he said. “And I found something that I was good at. … I think at the end of my sophomore year of high school, I decided that I was going to pursue a degree in music, and I really wanted to go the IU School of Music. And I worked my tail off my junior and senior years.”

He also noted that there was a “wonderful collection of professors and conductors and musicians” at Indiana University Bloomington.

When asked what made him decide to go into music education, Rodgers said he enjoys “the challenge of making music with students and inspiring them to be the best that they can be.”

“I know that sounds kind of corny,” he admitted. “And it sounds cliché. But it’s my job to be this kind of architect, and I can mold and make things with parts and pieces. … We’re trying to put a puzzle together, right? All the pieces fit perfectly. We’ve got this beautiful sound, and it goes wonderfully nice. And there are times where the challenge is to make it sound great and to make some improvement, to do something every day to make it better.”

When asked what he plans to do in retirement, Rodgers quipped, “Learn how to play golf.”

He’s also been asked to play in some ensembles and will likely continue to give some private lessons, as well as some “private work and judging.” He may also “dabble” in being a tour guide and is certain he’s not done teaching yet, even if it’s not full-time anymore.

“First order of business is to get my knee replaced and get my health under control,” he added. “I had a stroke last June, and part of the reason I’m stepping down when I am now is because physically I’m not 100% able to do what I need to do to do in both of these positions.”

Rodgers said it’s hard to step down after putting 22 years of his life into directing the two bands, but he knew it was time.

In reflecting on what it means to be a band member, the retiring director noted that people in the audience at a concert often don’t grasp all of the work that goes into a good performance.

“It gives those kids a sense of accomplishment,” he said. “It gives them a sense of pride in what they do. And it really gives them those skills … not to mention the hard work, leadership and the organizational skills it takes to carve out a time to have to walk into a practice room and practice every once in a while, right, or practice every day. It’s a discipline.”

Some students have become band directors, teachers or professional musicians, said Rodgers. Others have gone into STEM fields or own their own business. Three of East’s top 10 students in the Class of 2022 are band students, including valedictorian Jenna Boewe.

To Rodgers, their achievements go beyond the label of “geek.”

“It’s like, stop stereotyping the people here and understand that we’re musicians,” he said. “And yes, we might be a little weird. And I’ll admit to that, a little bit. But that’s kind of what musicians are, right? We’ve got creative things that we try to do every day in class. And hopefully, down the line, someone may have some skills instilled — like I said, you don’t have to play. You just have to just go there and do something with the skills you might have learned in class with me.” 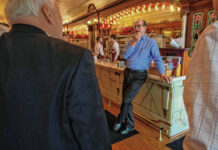