What we have here is Old Testament meets Old West, and by sundown today, two hard-hearted varmints will have learned their lesson and let the dust settle on their dastardly and deceptive discord.

Somewhere amid all that is the wisdom of forgiveness in the free biblical musical comedy “The Legend of Wiley Jake” at 6:30 p.m. today at Old United United Church of Christ, 12703 N. County Road 50W near Edinburgh. Nationally touring father-son duo Tommy and John Thomas Oaks co-wrote the show that unfolds like a cowpoke tale. The pair, based in Knoxville, Tennessee, are frequent visitors to the Columbus area.

And when they first presented this show locally in 2009 at Community Church of Columbus, more than 800 people attended while laughing and learning about the story of squabbling siblings of Esau and Jacob trying to deceive their father, Isaac. Set in very modern times, pardner.

Actually, they regularly encourage their audiences to join in on their fun. For instance, today the two are encouraging those attending to slip into their chaps or other Western wear.

The lighthearted script and songs contain a serious message of serious change.

“The story is really one of Jacob’s redemption — and how he turns from being a cheating, conniving, underhanded, self-serving pig,” John Thomas Oaks said.

In the biblical text from Genesis, Esau sells his birthright to Jacob for a bowl of soup (which the Oaks have tuned into “Texas Tongue-Twister Chili”). And when Jacob capitalizes on the deal by tricking their dad into releasing his coveted blessing, Esau vows to kill him.

Oaks has mentioned that the show’s tunes give the performance “a ‘High Plains Drifter’ feel.”

The two bring their own minimal props, and according to John Thomas Oaks, even make their own sandwiches when they’re traveling on the road. The pastor and friend would love to see people who perhaps have been away from church check out the nontraditional presentation.

“I hope it can maybe draw some people currently disconnected from a church home, because I certainly don’t want to steal anybody from anywhere else,” White said.

The two have said more than once that their performances have been lauded from audiences of diverse faiths. On one of their more recent visits to Hope, they performed their original “A Whale of a Tale” production highlighting the story of Old Testament prophet Jonah. White and his wife lent their voices to a recording of the show.

“I was the sound of the whale throwing up (Jonah),” White said. “That’s my claim to fame.” 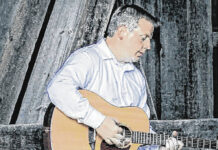