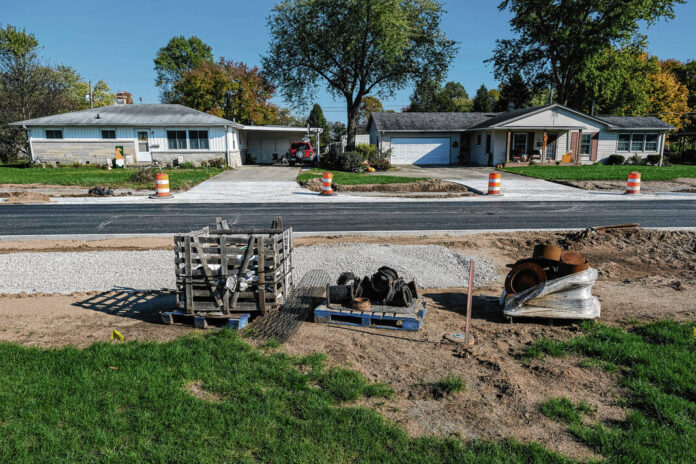 The end of the Taylor Road project may be within sight.

City Engineer/Executive Director of Public Works Dave Hayward estimated that the road will open back up early this week, weather permitting, with the project reaching full completion in August.

At present, Taylor Road is closed from 25th Street to Rocky Ford Road, except to nearby residents going to and from their homes. Final surfacing is underway and will be followed by striping.

Hayward told the Columbus Board of Works that there is some traffic signal work at 25th Street that will “lag a little bit behind” the rest of the project but not have a major impact on traffic.

“They need to get the detectors in the right place for the new lane configuration, which changes as part of the project,” he said. “So that’ll only take about a day, but it’s a separate subcontractor that needs to get that scheduled and get in there.”

There will be lane closures while this work occurs, but the street will otherwise remain open.

Hayward estimated that all other aspects of the project will be done by Friday, with the signal work being finished within the following week.

According to city officials, Taylor Road project improvements are intended to make the road significantly safer for drivers, bikers and pedestrians. These improvements include:

Various aspects of the project have resulted in criticism from local residents, including the two roundabouts. Some have taken to social media or The Republic’s Onions section to express their displeasure about this particular feature.

When asked if he had any insight into why this piece of the project has been unpopular, Hayward said that it may be partially an issue of familiarity — there aren’t many roundabouts in town, and people aren’t used to them.

Any traffic entering the roundabouts should yield to traffic that is already inside the circle. Vehicles should enter to the right and exit to the right.

“It’s not intended to be driven over for most people, but certainly emergency vehicles, larger vehicles can do that.” he said. “It’s designed to accommodate that, if necessary.”

There haven’t been any problems with regular vehicles driving over the roundabout centers since raised islands were put in, said Hayward. However, there were some issues prior to their installation.

The roundabouts were chosen for the project based on meetings with the residents along Taylor Road, he said. These individuals saw “a real need to slow traffic down,” and the city’s consultant indicated that roundabouts were a good way to achieve this.

When asked if there’s been any increase or decrease in traffic accidents and incidents along Taylor Road over the course of the project, Hayward said the city hasn’t seen much of a difference.

“But it’s been under construction, so it’s not a good comparison yet, at this point,” he said.