INDIANAPOLIS — Sen. Greg Walker, R-Columbus, said he voted in favor of a near-total abortion ban over the weekend because he believes public policy should minimize women’s ability to choose to get abortions but defended an exemption in cases of rape and incest as a “pro-life position.”

The Indiana Senate on Saturday narrowly passed a near-total abortion ban during a rare weekend session, sending the bill to the House after a contentious week of arguments over whether to allow exceptions for rape and incest, The Associated Press reported.

The Republican-controlled Senate voted 26-20 after about three hours of debate, passing the bill with the minimum 26 votes needed to send it on to the House, which Republicans also control.

The bill would prohibit abortions from the time a fertilized egg implants in a uterus. Exceptions would be allowed in cases of rape and incest, but a patient seeking an abortion for either reason would have to sign a notarized affidavit attesting to the reason for the abortion.

“I think there is a role for public policy to try to minimize the choice of abortion for women,” Walker said Monday. “I supported the exception for rape and incest because I believe that’s a pro life position. (I’ve) got colleagues that disagree, but we have bordering states that are publicly inviting women to seek abortion procedures in their jurisdiction.”

Walker said that if Indiana expands services to pregnant sexual assault survivors — including post-trauma and post-partum support — “we stand a better chance of providing the support that leads to a decision to bring the child to term.”

“I think if we could do more, we would ultimately effectively save more lives of mothers and children without a total ban,” Walker said.

The vote came amid an evolving landscape of abortion politics across the country as Republicans face some party divisions and Democrats see a possible election-year boost, according to wire reports.

Indiana is one of the first Republican-controlled states to debate tighter abortion laws since the U.S. Supreme Court last month overturned the precedent establishing a national right to an abortion.

Abortion-rights supporters have objected to the Indiana bill’s tighter restrictions on the procedure, while abortion opponents have said it’s too lenient with its exceptions and lacks enforcement teeth, according to wire reports.

On Thursday, the Indiana GOP splintered after the rape and incest exceptions remained in the bill when an amendment failed that would have stripped out those exceptions.

Ten Republican senators voted against the legislation Saturday, including a handful who support abortion rights.

Gov. Eric Holcomb, a Republican, said earlier this summer that he had no “red lines” on what anti-abortion measures lawmakers might consider. But on July 12 Holcomb sidestepped taking a stance on how far the Republican-dominated Legislature should go in restricting abortions in its special session.

Now, the bill heads to the House, where proposed changes could come as soon as this week — the second week of lawmakers’ three-week special session. Lawmakers must adjourn their session by Aug. 14.

House Speaker Todd Huston on Friday declined to discuss specifics of the Senate bill. But he said he supports the rape and incest exceptions.

Rep. Ryan Lauer, R-Columbus, has said in the past that he would be open to considering a total abortion ban but did not respond to mulitple requests for comment Monday on the abortion bill pending in the House.

In a tweet in June following the Supreme Court’s decision to overturn Roe v. Wade, Lauer said, “I look forward to helping pass pro-life bills that protect the innocent with strong support for expecting mothers and newborns.”

GOP Sen. Sue Glick of LaGrange, who authored the abortion bill, said during the debate she doesn’t expect the legislation approved by the Senate to be the final version the legislature passes. She called the Senate bill “an expression of where we believe the state of Indiana is right now.”

The legislation’s passage “is a huge step forward in protecting the life of the unborn children in our state,” Glick said in a statement after the bill’s approval.

Walker said it would be “extremely difficult” for the Senate to pass an abortion bill that is significantly different than the version passed this past weekend.

“When you have a bill that passes with the minimum amount of votes in order to move it to the next chamber, one should be careful traveling too far afield from the original language,” Walker said. “…It’s going to be extremely difficult on an issue that’s this personal to every member of the body — the ones that voted yes and the ones that voted no — to see much change and expect that to be wildly successful.” 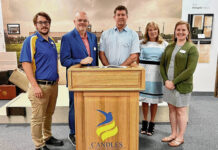