By The Daily Journal, Franklin

GREENWOOD, Ind. — Data from the Greenwood Park Mall gunman’s computer cannot be recovered, but all hope of determining a motive is not lost.

Despite the best efforts of FBI agents, they were unable to recover data from the laptop found in the gunman’s oven, Herb Stapleton, the special agent in charge of the FBI’s Indianapolis bureau, said during a media event Thursday.

Police say the gunman, Jonathan Douglas Sapirman, 20, of Greenwood, placed his laptop in the oven at his apartment with a can of butane before departing for the shooting. The heat from the oven damaged the laptop beyond forensic analysis, Stapleton said.

The FBI is still working to analyze the cell phone that police say Sapirman dropped in the toilet in the mall bathroom before opening fire in the food court that day. Stapleton didn’t have a timeline for the analysis but he was hopeful that data can be extracted.

In 15 seconds, police say Sapirman shot three people and injured two others before he was fatally shot by Elisjsha Dicken, 22, of Seymour, who police are calling a good Samaritan. Victor Gomez, 30, and husband and wife Pedro Pineda, 56, and Rosa Mirian Rivera de Pineda, 37, all of Indianapolis, were killed in the shooting.

Police have not found any evidence that Sapirman was connected to the Greenwood Park Mall, and do not believe he knew the victims. There is also no evidence at this time that the shooting was racially motivated, Greenwood police previously said. However, the people who were killed were Hispanic.

Law enforcement has also not found any evidence of a note or message left behind on the shooter’s cell phone, police said.

In the aftermath of the shooting, screenshots began popping up online of a post made the same day by a person on 4chan, an imageboard website that allows users to post anonymously. The post was made Sunday at 2:13 p.m. — nearly four hours before the shooting, according to screenshots reviewed by the Daily Journal.

It has not been confirmed by police that the post was made by the gunman, though people on social media are attributing it to him.

The post is accompanied by what appears to be a photo of a Nazi officer getting married and includes a link to three photos showing a young man posing for photos with two rifles in the background. In two photos, the man is wearing a vest, a hat and sunglasses and his face is obscured by a face mask. The third photo is of three weapons sitting on a beige carpeted floor. Two of the weapons are semi-automatic rifles and the third is a handgun, the screenshots show.

The weapons in the photos appear to match the descriptions of the weapons police found in the suspect’s belongings.

The photos have been taken down from the Imgur photo website, with the link now showing a message saying, “The image you are requesting does not exist or is no longer available.” However, screenshots of the images are continuing to be posted on social media.

Greenwood police have been made aware of the post and are investigating it, Jim Ison, police chief, told the Daily Journal July 20.

“We are working with the FBI on this and have submitted search warrants to retrieve Sapirman’s social media account records and archives,” he said. 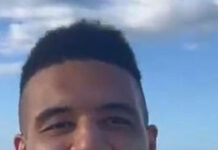