It didn’t take long after Logan Haston arrived at Columbus North and met with his new football team that one player made a distinct impression.

At 6-foot-1, 295 pounds and full of energy, Savion Miles stood out both on and off the field.

“Literally, he was the first person I noticed,” Haston said. “With his size and his personality, that makes a lot of sense. He’s a very outgoing person, and his demeanor off the field is just as special as what he does on the field. Obviously, when you see him on the football field, his talent is obvious. His size and strength is obvious. He just kind of jumps out at you as soon as you look at the field.”

Miles has wreaked havoc as a defensive tackle the past two years, helping North to back-to-back Conference Indiana titles. He had 52 tackles, including seven for losses last season, despite facing frequent double-teams.

With the Bull Dogs’ other three starting defensive linemen from last season having graduated, Miles knows he’ll be counted on to get to the quarterback this fall. 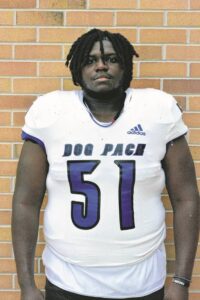 “I’m really looking forward to it, playing with my brothers,” Miles said. “My coaches put me in the right position, and I just have to go out there and dominate. Our coaches are the ones that really put that on you and help you be the best you can be.”

While he has been exclusively a defensive lineman the past two years, Miles is expanding his game this year as a starting offensive guard.

“He’s the kind of kid that you can’t keep on the sidelines for too long,” Haston added. “We have to have him out on the field. It was a process for him in the summer, getting up to speed and getting coaching. He was very raw, but you could see the transformation take place over the summer. He just started to click and get it to the point where he’s doing really well for us.”

Besides learning blocking technique, Miles has had to get used to the fitness and conditioning level to play on both sides of the ball. He got his first taste of that in Friday’s scrimmage against Greenwood.

“It was pretty tiring, but my coaches have prepared me in conditioning,” Miles said.

“I think he’s going to kind of lead the charge for us on defense,” Haston added. “He’s a guy that offenses are going to have to scout and prepare for, and then on the offensive side of the ball, he’s going to help us move the chains. He’s just going to be a huge factor with his playing ability and his leadership.”

Miles was happy with the way the Bull Dogs progressed from their intrasquad scrimmage to the Greenwood scrimmage. North opens the regular season Friday at Class 5A No. 2 Decatur Central.

“I think we made a big adjustment from the way we scrimmaged at Blue and White Night,” Miles said. “We’re not all the way there, but we’re looking a lot better, and I think come this Friday, we’ll be prepared.”

Prior to the season, Haston had the entire team vote on captains. Miles and fellow senior Tyler Blythe were selected.

“The guys view him as a leader because he can connect with everybody on the team,” Haston said. “Because he has such a friendly, outgoing personality, people just kind of gravitate toward it.”

A big senior season could go a long way in helping Miles get recruited by Division I programs. He has talked to coaches from Division I Holy Cross and Robert Morris and has a scholarship offer from Division II Findlay (Ohio).

But for now, Miles is focused on the season ahead, beginning with Friday’s opener.

“Most important is our team,” Miles said. “I’m trying to win. I went to get conference champions again this year, three-peat, and just have a good record and keep on pushing as a team. I think that we can be really good. The only one that’s going to stop us is us.”