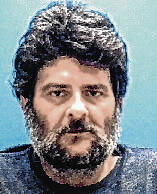 A dispute over being asked to leave a campsite area led to the alleged murder of a local man near a woodline in the area of North Indianapolis Road.

In a probable cause affidavit, Columbus police say Thompson had allowed Davis and his wife, Alysha Davis, to stay temporarily at a campsite near the woodline. However, Thompson and his roommate, Robert Lehman, were in the process of removing the couple because of their constant fighting and arguing.

During the early evening of Sept. 15, Lehman told Davis he had 30 minutes to leave, the court document states. While Davis responded by cussing at him, Lehman walked to another area of the property, Foust wrote.

As he passed Thompson, who was walking toward the campsite, Lehman warned him not to go to the campsite, the court document states. However, Lehman returned to what is described as his “homestead area” nearby and fell asleep, according to the probable cause affidavit.

After waking up the next morning and not seeing Thompson, Lehman searched and found the victim lying on the ground at the campsite and called 911, court documents state. Thompson was transported to Columbus Regional Hospital where he was later pronounced dead at 4:40 a.m. by doctors, according to police reports.

Preliminary autopsy reports indicate Thompson died of multiple blunt force trauma, as well as a large severed vein that resulted in the victim slowly bleeding to death, the officer stated.

At 7:31 p.m. Sept. 16, officiers encountered Joshua and Alysha Davis having a “domestic dispute” in Mill Race Park, court documents state. Both denied going back to the campsite where Thompson’s body was found, the report states.

But during a second interview Saturday, Joshua Davis admitted he had returned to the campsite to retrieve his dog, which was handed to him by Lehman, the officer wrote.

Davis said that after he put the dog into his 2004 Nissan Quest mini-van, he was approached by Thompson who walked to Davis’ drivers’ side window and threatened him with a knife, the affidavit states.

Thompson then moved to the front of the van, Davis said, which prompted Davis to rev up the engine in an attempt to scare the man with the knife.

The van “lunged forward,” according to the probable cause affidavit and struck Thompson, causing him to fall to the ground. Realizing that he had made a serious mistake, Davis mistakenly put the van in reverse, backed up, and felt a bump, court documents state.

Davis reportedly told the officer he never got out to check on Thompson, fled the area, and did not report the incident to authorities.

Davis is being held without bond in the Bartholomew County Jail, jail officials said. Autopsy results, which are expected to take six weeks, are pending with the Hamilton County, Ohio coroner’s office, investigators said.