“I’ve serenaded Bushes, Clintons, Trumps, Obamas, Bidens,” he said amid a recent email exchange while traveling. “I even sang ‘Can’t Take My Eyes Off You’ at a (Washington) D.C. Valentine’s Day party barely a month after your (Indiana) former First Lady (Karen Pence) became our Second Lady.

“I made sure not to lay it on too thick, though, because — ahem — Vice President (Mike) Pence was right there beside her.”

Young opens the new season of the Columbus Indiana Philharmonic’s Cabaret at The Commons series at 7:30 p.m. Sept. 29 with his show “Mostly Soul: Beloved Hits From Motown to Broadway,” at The Commons, 300 Washington St. in downtown Columbus.

In the show with music director Tommy Faragher, he interprets the greatest hits of Little Anthony, The Platters, Sam Cooke, Smokey Robinson, Luther Vandross and, yes, some “Jersey Boys” Frankie Valli and The Four Seasons material, too.

“I’ve always been drawn to deep feeling in music,” he said. “I’m Italian on my mother’s side, Welsh on my father’s (think Tom Jones, Shirley Bassey and then ANY Italian singer). We have big hearts and big emotions.

“American soul is the perfect fit for me, especially the classics. A personal favorite in this set is a more-obscure Little Anthony number called ‘Hurt.’ It’s a knockout.”

As Valli on Broadway, Young garnered unprecedented accolades from New York and national media. Young went on to win the lead actor Tony, Drama Desk, Outer Critics Circle and Theatre World awards, becoming the only American actor in history to win all four leading actor awards for a Broadway debut.

“One of the first things I did after finding out I was cast in the original Broadway ‘Jersey Boys’ was go to Vegas and see Frankie live,” Young said. “I bought a ticket to his show at the Flamingo in Vegas and took notes on a napkin.

“He didn’t know I was there. Since then, I’ve seen him many other times and he still has this exciting electricity that changes the air in the room.”

The New York Times writes that Young “has a disciplined one-in-a-million high tenor shading into falsetto that he can direct through the stratosphere.”

The “Jersey Boys” role that shot him to fame also opened myriad doors for him to meet a variety of other classic artists. They work their way into his cabaret act.

“I love,” he said, “to talk about my intersections with these great people.” 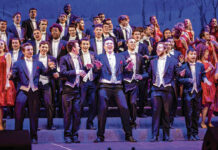