When the flower pots came down just before Ethnic Expo, it was as if downtown Columbus lost a little of its smile.

That sentiment comes from the woman who has taken care of 56 flowering pots and 18 hanging plants in the downtown area, as well as flowers outside Columbus City Hall and the county’s general office building, for the past 14 years.

“It has a little sadness to it,” said Becky Church, often referred to as the Flower Lady. “People benefit from seeing the colors of the flowers. And studies show how community beautification can help keep crime down.”

While the flowers will return next spring, they will no longer be overseen by Church. After she crafts the Christmas floral displays at City Hall, the proprietor of Becky’s Flowers will give up her largest client, Church said.

“It was a very difficult thing for me to give it up,” the 62-year-old Church said. “As much as I love and enjoy it, I had to start cutting back because of family responsibilities, a bum shoulder and old age.”

It has also been a strain to start working on the gardening work at 4 a.m., so that her presence doesn’t have a negative impact on business traffic, nor on her own safety, she said.

Church’s work week could be exhausting. For example, just going on a watering route to all 38 of her clients (she counts the entire downtown area as just one client) takes about eight hours to complete, she said.

“I fill my 300-gallon water tank about five times to water all my properties,” Church said. “But if you don’t consistently water flowers, there’s a point of no return when they start to look bad and completely die out on you …”

Church paused for a moment before finishing her thought.

“But I’ve never lost a flower in all these years,” she said with a well-earned sense of pride.

After deciding to step down, Church said she wanted to have a plan to provide Mary Ferdon, the director of administration and community development for the city of Columbus, regarding her successor.

At Church’s suggestion, the city chose one of two women recently hired by the Columbus City Garage. The new downtown flower lady will be Brooke Moore, although Church said she will still come up with floral designs and assist Moore next year in making sure everything continues to look good.

Despite giving up her largest account, Church says she has no current plans to retire. She ensures her over three-dozen remaining clients that she plans to continue beautifying properties including Hotel Indigo, Upland Brewing Co., Centra Credit Union, the Columbus Learning Center and seven Bartholomew Consolidated School Corp. schools.

But Church adds she is making her future plans one year at a time.

The origin of the Downtown Columbus Flower program goes back to 2003, when 16 people interested in gardening piled into a bus to tour world-class gardens in Chicago. That trip resulted in a daffodil project that encouraged residents in Columbus to plant that particular type of flower next to their homes and businesses.

That same year, there was a conversation between Jim Dietz, then-proprietor of the former Smith’s Row restaurant, and the late greenhouse operator Gordon Elsbury. When Dietz said more downtown beautification was necessary to attract customers, Elsbury told him about the America in Bloom program, which Church says includes a competition between comparable-sized communities.

Late in 2003, Dietz became the first president of a grassroots group called Columbus In Bloom, which met once a month at the Bartholomew County Public Library and worked to get businesses and private residents to create attractive floral displays on their properties.

While Dietz may have been president, news stories from that time indicate that Church supervised a good deal of the physical work for the new organization. Besides landscaping, other beautification efforts included repainting streetlamps and redoing brickwork in the intersections.

In 2005, Columbus won the top division prize in the America in Bloom contest. Efforts to create even more attractive floral displays continued, which encouraged the community to enter the 2007 International Challenge of the Communities in Bloom contests.

While the city didn’t take home international honors, the administration of then-Mayor Fred Armstrong did initiate the downtown flower program, supported with Streetscape funds available through the Community Development Department, Church said. She has overseen the program every year since 2008.

“Such acts unite residents behind a sense of pride in their community,” The Republic stated in an editorial regarding the beautification efforts. “Although there is an impressive cadre of volunteers who have readied the community for judging, there is an even more impressive satellite group of non-involved property owners and residents who want to fit their part of the world into the overall effort.”

Church was also instrumental in designing the beautification of the roundabout by Mill Race Center. She has also been involved in efforts like Curb Appeal Recognition, Earth Day, Arbor Day, and other planting projects.

While much of her downtown work was completed while most residents were still in bed, the name of Becky Church did become well-known for the 11 years she spent as an organizer of the downtown Columbus Farmers’ Market, which has attracted up to 3,000 visitors. The market was eventually handed over to the Columbus Parks and Recreation Department, Church said.

Despite the early morning start-time, there have been times when Church needed to be downtown during the work day, she said.

“People who approach me are like ‘Oh! You are the one who takes care of all of these flowers,” Church said. “It seems like it magically happens. I do get nice compliments.”

And now, as she looks back on the last 14 years, Church says it was a tremendous privilege being in charge of beautifying downtown Columbus with her floral displays.

“I feel I was able to add another layer of beauty to an already beautiful downtown,” Church said. “I will always carry that with me, and feel it will be a bit of my legacy. Hopefully, I’ll always be remembered as “the Flower Lady.” 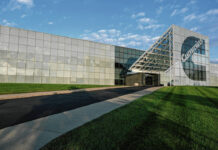 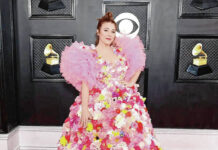