By Ryan Brewer and Jon Padfield

This article arises from the foretelling illumination of a Hoosier for whom – no matter the personal or political affiliations or preferences – we all can have much respect and admiration.

As a civic leader and mentor for community leaders throughout the State of Indiana, it would be difficult to come up with the name of a Hoosier we could learn more from, about serving Hoosier communities, than Sen. Richard G. Lugar. The late Dick Lugar served our state and nation for over 50 years, passing away just before the onset of the pandemic in 2019. May he rest in peace.

Prior to his death, Lugar served Indiana University by cofounding (alongside former distinguished U.S. Rep. Lee Hamilton) the Lee H. Hamilton and Richard G. Lugar School of Global and International Studies. Prior to founding this school within IU, Lugar served the United States Senate from 1977 through 2013, prior to which he served as the mayor of Indianapolis from 1968 – 1975.

In his speech as mayor of Indianapolis dated Dec. 14, 1968 when he addressed the community, Lugar said, “A key factor in each great city is the strength of a distinguished city university. For many years, many voices have called for a great state university to be established in Indianapolis.”

Lugar’s idea was clear; to be a great city, it must be home to a great state university. From the sage and wisdom of Lugar’s 1968 presentation to central Indiana, two years later IUPUI and its center in Columbus – IUPUC – were formed. The questions one might ask could be:

(1) Are IUPUI and IUPUC distinguished universities? and,

(2) What makes for a great state supported university here in Indiana, particularly where Indiana ranks 40th in higher educational attainment?

Measured by efficiency of economic impact – or brain gain, no public college, public university campus, or public university campus center is greater than IUPUC. In fact, among state supported colleges and universities, IUPUC ranks first in percentage of graduates who live in the state of Indiana, and IUPUC ranks first in expected economic impact per student.

Our analysis and rankings are the results of a LinkedIn professional website content analysis we conducted, reflecting current residential locations of graduates of the various state supported colleges and universities.

One might ask whether it is worth it for Indiana taxpayers to support K-12 graduates to go on and attend a public university in Indiana and graduate from there? Yes, specifically, when the graduates spend their earnings in Indiana. According to the Brookings Institute, the average two-year community college graduate generates $81,000 more than a high school graduate in direct spending over the course of a lifetime, and the average four-year university graduate generates $278,000 more than the average high school graduate in direct spending over a lifetime.

Indiana’s retention of its college graduates generates considerable tax revenues for the state and does not consider synergistic effects arising from community improvements such as beautification, amenities added, or employment options. The direct tax revenue alone would be $20,000 per four-year college graduate in Indiana, not to mention the attraction of companies and community amenities that follow. State supported colleges are worth the investment, we just need to keep the graduates in Indiana.

Who gives back to Indiana the most in economic impact? The accompanying graphic shows the lineup in those terms. 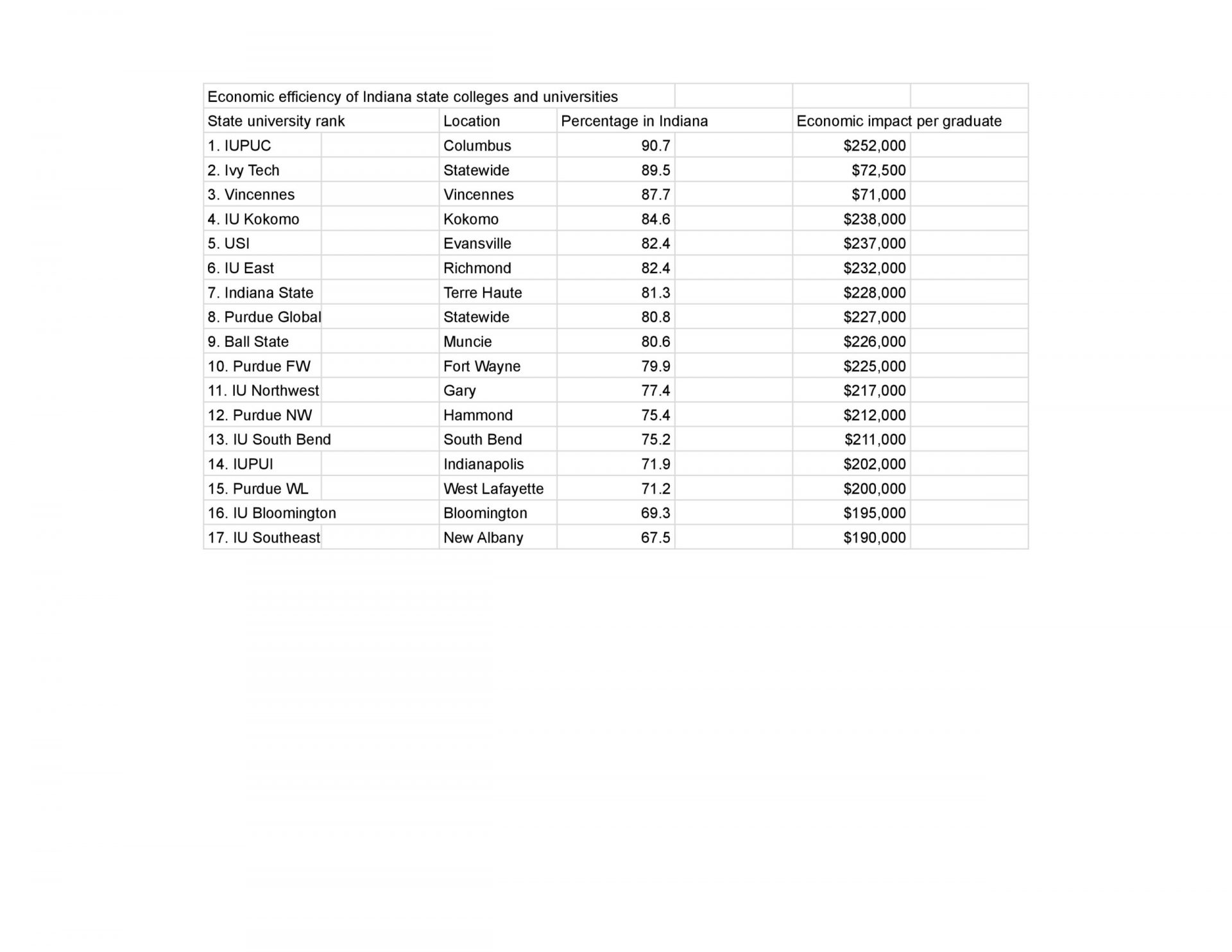 State University Rank: The content analysis and rankings rely on the validity of self-reports of locations indicated by LinkedIn users. Results are subject to change given changes in use of LinkedIn and accuracy of self-reports.

Location: Location of graduates was estimated from LinkedIn profiles of graduates without specified graduation dates and are designated by closest metropolitan area.

Percentage: Three colleges were excluded from the analysis due to small sample sizes, Purdue Polytechnic Columbus has 12 graduates and was excluded to low sample size, IU Fort Wayne is relatively new and only one graduate was found on LinkedIn and IU online did not have graduates on LinkedIn.