Turning Point Domestic Violence Services officials have said that they plan to start meeting regularly with Bartholomew County’s judges to take a systemic look at how to prioritize domestic violence prevention in the community.

The meetings, which officials said they expect to be quarterly, will consist of discussions one a range of topics related to domestic violence, including how to improve and streamline Turning Point’s advocacy services and “keep open lines of communication and build on our relationships.”

Turning Point President Whittney Loyd, who recently took the reins of the organization after long-time president Lisa Shafran retired, said the organization has “positive relationships” with the local judges, court staff, law enforcement, among other stakeholders in the community.

Turning Point is a Columbus-based agency that seeks to prevent and eliminate domestic and dating violence and serves survivors of interpersonal violence in Bartholomew, Brown, Decatur, Jackson, Johnson and Shelby counties.

“I’m new leadership and we have some new judges, so it just seems like a good opportunity to get to know each other a bit better and learn about their processes and for us to share more about how we work as an agency,” Loyd said. “I think it will be beneficial for everybody.”

Carrie Kruse, vice president of direct services at Turning Point, said the meetings essentially seek to systemically look at “how we lift domestic violence up as a priority in daily operations on both ends.”

“We do have an office located at the (Bartholomew County) Courthouse, so our relationship has been long-standing,” Kruse said. “We have had a full-time staff member located there to be easily accessible to survivors who come in and want to file a protective order and also just accessible for court hearings, criminal hearings and just have daily contact and relationships with court staff.”

The news of the quarterly meetings between Turning Point and the local judges comes just over a month after Columbus resident and mother of two Julie A. Schmidtke was shot to death by her estranged husband in an apparent murder-suicide that shook the community.

Just 10 days before the murder-suicide, Bartholomew Superior Court 2 Judge Jon Rohde had denied Schmidkte’s request for a protective order against her estranged husband. Last year was Rohde’s first year as an elected judge.

Shortly after the murder-suicide, Turning Point issued a statement in which the organization said it was “devastated by the recent loss of yet another life due to domestic violence” and that domestic violence “homicides and all levels of domestic and interpersonal violence are ocurruring in our very own backyards,” describing the problem as a “harsh reality” in Bartholomew County and elsewhere.

Tragedies related to interpersonal violence can be mitigated through systemic, comprehensive and community intervention and awareness, the statement said.

“A lot of people don’t realize how widespread interpersonal violence is in all of the communities that we serve,” Loyd said. “I think the tragedy with (Julie Schmidtke) was a little bit of a wake-up call for people as far as this could really happen in our community. It is happening.”

Since the murder-suicide, the issues of domestic violence and how protective orders are handled locally have been thrust into the spotlight.

The victim had requested a protective order against Charles Schmidtke on Oct. 21, alleging that he had physically harmed her, committed a sexual offense against her and committed repeated acts of harassment, court records state.

She provided screenshots of numerous social media posts and messages by Charles Schmidtke as evidence to support her claims, according to court records.

Rohde denied the request for a protective order during a hearing on Dec. 9 in Bartholomew Superior Court 2. According to court documents, both Charles Schmidtke and Julie Schmidtke attended the hearing in which Rohde made the ruling and each was represented by an attorney.

Rohde declined to comment on why he denied her request, stating that “judges are ethically prohibited by the Rules of Judicial Conduct from making any public comment about the rationale for decisions made in the courtroom.”

Julie A. Schmidtke, 36, was found dead Dec. 19 from multiple gunshot wounds in a residence on the 2200 block of Sumpter Court along with her estranged husband, Charles Schmidtke, 41, who died from a single gunshot wound to the head, officials said.

“I think the system is broke,” said Craig Yow, the victim’s father. “She was trying to get a restraining order. …She had filed charges against him earlier. Another police department had called the Columbus police to have them check on her welfare because they were concerned that he had done something to her. There’s a whole host of things that there’s a breakdown in the system.”

Investigators have told the victim’s family that Charles Schmidtke broke into the Sumpter Court residence on Dec. 19 wearing body armor, dressed in black and had multiple firearms, Yow said. Both of Julie Schmidtke’s children were inside the residence at the time of the break-in, Yow said.

Yow said that one of the children reported that Charles Schmidtke was smiling as he dragged his mother into a bedroom, reportedly telling the boy, “I’m only here for your mom, call your dad to come get you.”

Inside the bedroom, Charles Schmidtke shot her five more times, “and probably the last two shots were to kill the 5-month-old” fetus, Yow said.

Then, Charles Schmidtke removed his body armor, placed some of his guns on a bed and “what the police said is it appears he sat down, crossed his legs and sat in front of her and shot himself,” Yow said.

Rohde is an attorney with a law enforcement background as a former Columbus police chief.

Worton also has a law enforcement background, and previously served as Columbus police chief and was first elected judge in 2012. Benjamin is in her second term as judge, first elected in 2016. Prior to her election as judge, she served as a pro tem judge in the local court system and as the Bartholomew Consolidated School Corp. attorney.

Overall, local records show that 516 requests for protective orders were filed in the county last year, suggesting that about 14% of the requests filed last year were denied.

Last week, The Republic contacted all three judges — Rohde, Worton and Benjamin — to ask if they planned to discuss protective orders and how they are handled in the county in light of the apparent murder-suicide following the denial of a protective order.

In a joint statement, the judges said, “We regularly discuss how to best serve the people of Bartholomew County, including handling of protective orders.”

“While judges are ethically prohibited by the Rules of Judicial Conduct from making any public comment about the rationale for decisions made in the courtroom on specific cases, we look forward to continuing to meet and have an open dialogue with local advocacy groups in the community to educate the public on court policy, procedure and the law related to protection order proceedings,” the judges said in the statement. “We encourage anyone experiencing intimate partner violence to reach out to advocates like Turning Point for assistance.”

The judges declined to comment on the disparity in the number of protective orders issued by each court.

“Each protective order petition that comes before the courts are decided on the individual merits,” the judges said. “We are unable to comment on groups of cases that are decided in one court relative to another court for a given period of time because each protection order petition and case have different allegations, facts and evidence.”

Officials at Turning Point said the local judges “are responsive in reviewing” requests for protective orders and that the petitions are “being reviewed in a timely manner.”

“I think it’s just important that everyone in the system, including judges, continue to make domestic violence a priority and stay informed and educated on domestic violence so that when we have these opportunities to use the tools that are available to us at a systemic level, that those are being used,” Kruse said. 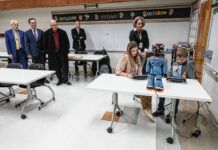 Learning from a robot: Meet Milo, the newest in technology to help students with autism 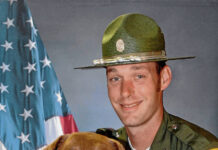