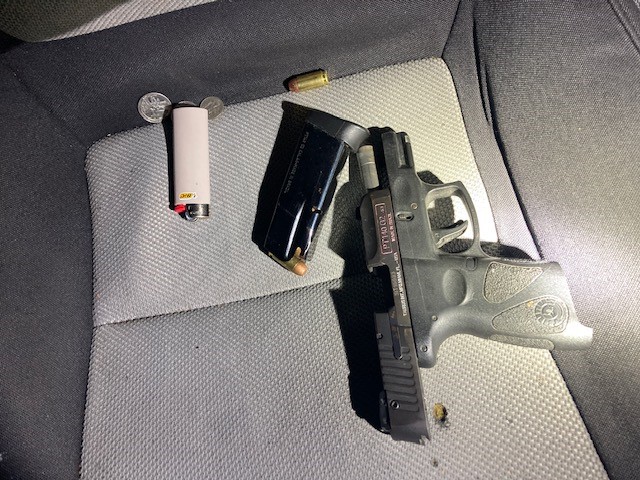 COLUMBUS, Ind. — A traffic stop on I-65 by a Bartholomew County Sheriff deputy led to the arrest of an Indianapolis man on a charge of a felon in possession of a handgun and possession of marijuana.

At about 3:04 a.m. Monday, Deputy Dylan Prather was on traffic enforcement near the 72.5 mile marker of I-65 when he saw a silver passenger car with an inoperable headlight. Prather, assisted by Deputy Anthony Bagby, conducted a traffic stop based on the violation.

As Prather continued to speak with Wright he also observed a green leafy substance suspected of being marijuana inside the passenger compartment of the vehicle. Wright also told deputies that there was a handgun inside the vehicle in between the driver’s seat and center console, Duke said.

After receiving this information deputies removed Wright from the vehicle and detained him while a search a vehicle was conducted. During the search deputies located a loaded Taurus 40 caliber semi-automatic handgun within reach of the driver’s seat which was confiscated, Duke said. Deputies also located a small amount of suspected marijuana.

Wright was later found to have a prior felony conviction for intimidation out of Hendricks County in 2022 for which he was still on probation. As the investigation continued Wright told deputies that he was aware that he was not supposed to be possessing the firearm due to the conviction, however, he had the firearm due to a recent road rage incident, Duke said.

Wright was arrested for being a felon in possession of a firearm level 5 felony and possession of marijuana a B – Misdemeanor. Wright is incarcerated at the Bartholomew County Jail on a $15,000 bond.

“I want to praise deputies for locating a firearm carried by a felon that is now off the street. It is becoming more common for my deputies to located firearms being carried by convicted felons or people in possession of narcotics, said Sheriff Chris Lane.

Road Commander Lt. TA Smith also praised deputies saying, “This arrest from routine traffic enforcement shows the dangers faced by our deputies on a daily basis. Deputies quick observations and actions allowed for positive outcome for both the deputies and Mr. Wright.”