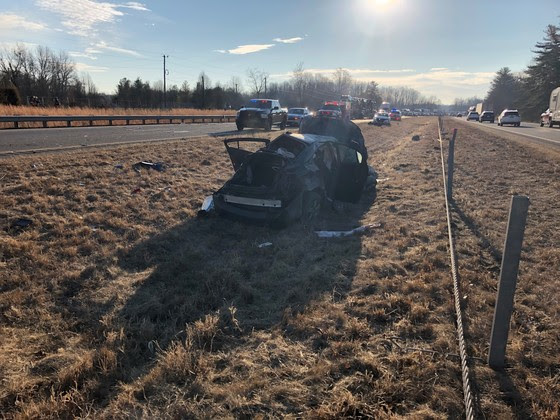 SEYMOUR, Ind. — A South Bend man died in a one-vehicle crash at 9 a.m. Tuesday on I-65 near the 44 mile marker in Jackson County.

The initial investigation by Trooper Andrew Garrett, Indiana State Police-Versailles Crash Reconstruction Team, indicated that a 2016 Chevrolet Cruze, being driven by William A. Dudek, 61, South Bend, was traveling northbound on I-65 near the 44 mile marker in southern Jackson County.  For an unknown reason, Dudek’s vehicle drove off the right side of the roadway.  The vehicle then struck a guardrail and became airborne.  The vehicle crossed all northbound lanes of I-65 and came to rest in the median, state police said.

Witnesses extinguished the fire that started when his vehicle came to rest.  Dudek was extricated from the vehicle and transported to Schneck Medical Center where he succumbed to injuries sustained in the crash.  Dudek was pronounced deceased at the hospital by the Jackson County Coroner’s Office.

The northbound lanes of I-65 were closed for nearly two hours for crash investigation and cleanup. The crash remains under investigation.

During the investigation, traffic was diverted off I-65 onto State Road 250 to U.S. 31 at Uniontown. A separate, unrelated property damage crash occurred on I-65 Southbound nearby that backed up southbound traffic for nearly an hour.