HOPE — People in northeastern Bartholomew County will celebrate a philanthropic milestone next month with a free luncheon for up to 500 people.

The Hawcreek-Flat Rock Area Endowment, launched in 2002 by community leaders from Hope, Hartsville and Clifford, has exceeded its goal to grow assets to $1 million. The achievement impacts the area as interest on the fund’s assets, built through charitable contributions, are in turn funneled back into the communities.

Over the past 17 years, $306,595 in interest on the fund’s assets has been awarded through 167 grants to individuals, organizations and projects in the two northeastern Bartholomew County townships. This summer, $42,035 in grants was awarded to 12 entities such as schools and fire departments in Hawcreek and Flat Rock townships, according to the endowment’s advisory board.

Now that the fund’s assets have topped $1 million, future investment profits are expected to result in grants that will approach or surpass $50,000 a year, said Adam Miller, Hawcreek-Flat Rock Area Endowment vice president of fund development.

The free meal and celebratory program to mark the endowment’s milestone is planned for 11 a.m. to 2 p.m. Saturday, Aug. 21 on the Hope Town Square, with the Hauser High School Fieldhouse serving as a backup in the event of inclement weather.

Beverages are being supplied by Hope Baptist Church, and the Clifford, Hartsville and Hope fire departments are providing tables and chairs for the event. Organizers are also working to provide musical entertainment, Miller said.

Four endowment backers will speak during the three-hour program:

Tom Miller, an owner of Hope Hardwoods and founding chairman of the advisory board, will make opening remarks.

Tim Andrews, who came up with the idea in 2019 to launch a $1 million challenge, has been one of the endowment’s largest donors.

David Webster, retired Hope Elementary 5th grade school teacher, will talk about what the endowment means to the community.

Shelby Fugate, a 2020 Hauser High School graduate and endowment board member, will share what it means to be involved in the effort.

In 2003, a year into the endowment’s launch, Andrews — a Bartholomew County native who rose during his career to become a successful East Coast business executive — donated $100,000 to the endowment, which quadrupled its assets.

“We grew up without much in terms of material goods. But I was nurtured by kind, caring people who gave from their hearts, expecting nothing in return: Teachers, neighbors, community leaders, relatives, friends,” Andrews told the Heritage Fund: The Community Foundation for Bartholomew County, which holds Hawcreek-Flat Rock’s nearly $1.2 million in a trust, and returns investment profits to local advisory board members for distribution.

“I’ve grown to believe that giving to others is best when you have no expectation or need of anything in return. While I no longer live in the Hope area, contributing to the endowment fund and encouraging others by matching their gifts, is my way of showing how much I care for those communities that helped me so much growing up in St. Louis Crossing,” Andrews said.

The endowment reached that $975,000 goal a year early, thanks in part to two other successful 1:1 matching grants — $24,599 from the Sharon (Sherry) Risk Stark Community Impact Fund and $15,000 from anonymous community members, Miller said.

Then Andrews’ latest gift put the $1 million campaign over the top.

The endowment’s logo features a flourishing apple tree with the words: “When nurtured, the seeds of one apple can produce an orchard.” Community support of the endowment has allowed that motto to be fulfilled, Miller said. 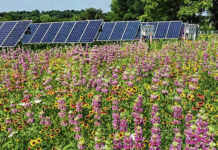