Columbus resident Tim Orr is a conservative, evangelical Christian with an Islamic studies degree from a Muslim University. Plus, he has been a part of a Christian-Muslim dialogue series in the past.

So he well understands the value of those from differing faith and spiritual backgrounds finding agreement and harmony in some segments of life.

Orr has organized, with the help of Pastor Frank Griffin of the local African American Pastors Alliance, minister Nic Cable of the Unitarian Universalist Congregation of Columbus and Pastor Felipe Martinez of First Presbyterian Church, an Interfaith Forum on Social Justice scheduled at 7 p.m. Thursday at the Columbus Learning Center, 4555 Central Ave. Others involved will be those from the Hindu, Muslim and Jewish faiths.

Orr’s promotional flier mentions that he ideally aims “to engage in cooperative, constructive, and positive interaction on social justice. What we hope to achieve is to model the value of loving the religious other and learn how different faith traditions tackle challenging contemporary issues.”

Orr mentioned that the topic of social justice is a wide one, and that most religions address in some fashion the idea of racism.

“if you’re a Christian, racism becomes not a matter of what you or I think,” Orr said. “In Scripture, it says that racism is wrong, because everyone is created in the image of God.”

Orr hopes this interreligious panel will be one of many in the future. For at least the past decade in his classroom at IUPUC, in community presentations and also in Faith section columns in The Republic, he has been outspoken about the need for various faiths to share ideas with one another while disagreeing agreeably. He also has championed and held dear his friendships with members of the local Muslim community.

“We have to integrate more people into these kinds of discussions,” Orr said.

Griffin of the local African American Pastors Alliance, is advocating for racial fairness and balance in everything from media to education. Griffin also serves as director of corporate responsibility for Cummins Inc. and pastor of Thy Kingdom Come Ministries in Greenwood. Each of those roles links him in some way to the issue of social justice, he said.

“With social justice, we all have a common ground,” Griffin said. “Sure, there are a few differences that we all have. But there are some big commonalities and themes that relate to helping others. And we want to be able to lean in on those commonalities.”

One big commonality is a core tenet of Christianity, according to Griffin.

“We’re first human, and we’re supposed to love and care about one another,” he said. “That’s a foundational belief — the desire to help one another. And I feel like Christians should lean in and be at the forefront of caring and helping one another.”

He also feels that Christians can help build a sense of unity among people even with differing spiritual beliefs.

“The Bible says that a three-chord strand is not easily broken,” Griffin said. 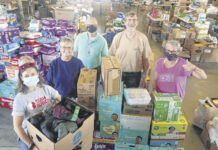 A lot of refugee children came over barefoot. An area church stepped up to help 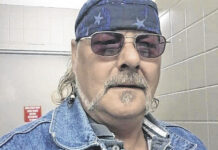 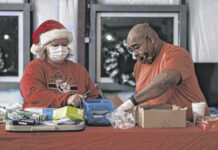