Although there never really is a good time to get injured, the timing of Jenna Lang’s knee injury couldn’t have hit Columbus North much harder.

The Bull Dogs were rolling along with a 10-1-1 record and were leading Class 3A No. 5 Bloomington South when their superstar forward went in to tackle the ball away. She ended up with a sprained MCL and PCL in her right knee, effectively ending her senior season.

“It was definitely bittersweet, how it all ended, but I wouldn’t change it for the world,” Lang said. “Playing with the seniors I played with my freshman year up to whenever I was a senior, just the memories and everything. It was just a great time, ending it with some of my teammates I had been with since my freshman year and being able to break some of the records and goals I’d been working toward that I never really thought that I would be able to do, but ended up doing it. It was unfortunate how it ended, but I was still able to accomplish some of the things I was looking forward to for my senior season.”

Lang, who scored 21 goals in 12 games this season, is The Republic Girls Soccer Player of the Year for the third consecutive year.

Last season, Lang set a single-season school record with 44 goals in leading North to a state final four appearance in 3A. She broke the school’s career record this season, finishing with 116.

Although she wasn’t on pace to score as many goals as she did as a junior, Lang was able to get her teammates more involved this season.

“The first 12 games, she had 21 goals and six assists, and to do that and bringing the attention that she brings every single game says a lot about who she is as a player,” North coach David Young said. “If you want to look at averages, she was averaging almost two goals a game and would probably put her in the mix of 35 to 40 goals. She really didn’t have that big game this year. Last year there was a couple games where she had six goals. This year, honestly, it was more of ‘I’m going to try to bring my teammates along with me’ as opposed to, ‘I’m just going to go out there and score six goals’ because she knew the importance of bringing those teammates along and making sure everybody is a part of it so that when we do get to that important game, she doesn’t necessarily have to take control of it if she didn’t need to.”

That thinking paid off for the Bull Dogs when they got to the postseason. Despite being without Lang and All-State center back Nitya Chenanda, they upset heavily favored Center Grove in the sectional semifinals.

“It was really tough,” Lang said. “I think Nitya felt it, too, because we both couldn’t play in the Center Grove game. It was hard, but I couldn’t have been more proud of what they were able to do in that game because we were definitely the underdogs with the adversity that we were going through. They definitely stuck it out and played for each other.”

North then edged archrival Columbus East on penalty kicks in the sectional final before falling to Bloomington South in the regional semifinals.

“When I wasn’t injured, I think we were kind of cruising along, and our chemistry was really good,” Lang said. “I think whenever I got injured, the dynamics kind of changed a little bit, and people had to figure out just adjusting. But I think postseason and finishing out the season strong was great. It showed a lot of heart for the girls, and the people that stepped up were fantastic. They stepped up when we needed them to most. It helped me also play a different role on the sideline kind of coaching and helping my teammates.”

Lang, who has been rehabbing with Dr. Nate Frasier, was cleared to begin running again this week. She can practice at the end of November and play limited minutes for her Indy Premier club team in December, possibly in time for the Dec. 11 All-American Game at Bearden High School in Knoxville, Tennessee, and will play in a knee brace for about two months.

“I’m definitely looking forward to it,” Lang said. “I’m not trying to rush anything even though I’m very anxious and kind of wanting to start again. I think now, my focus is on injury prevention until I start playing at Michigan.”

Lang committed to the Wolverines during last year’s tournament run. She visited the school again about a week before her injury.

Last summer, Lang helped lead Indy Premier to a runner-up national finish. She isn’t sure if she will be able to do that again since she may have to report to Michigan before nationals next summer.

“I’m definitely going to work toward starting and getting decent playing minutes my freshman year,” Lang said. “Hopefully some freshman honors, All-Big Ten or All-Big Ten Freshman team. But my main focus right now is getting healthy and working toward being able to play at a high level again.”

Jenna Lang, Columbus North: The senior led the Bull Dogs with 21 goals and had six assists.

Nitya Chenanda, Columbus North: The senior had one goal and three assists and led a defense that allowed only 12 goals in 18 games.

Mallory Gilley, Columbus North: The junior recorded 36 saves and had a 0.76 goals-against average.

Rion Stevens, Columbus North: The senior had three assists and helped a defense that allowed only 12 goals in 18 games.

Gabi Schuetz, Columbus East: The senior had one goal and two assists and led a defense that allowed only 16 goals in 17 games.

Alexis Spurgeon, Columbus East: The junior scored one goal and helped a defense that allowed only 16 goals in 17 games.

Allison Craig, Columbus East: The junior helped helped a defense that allowed only 16 goals in 17 games.

Kailene Cockerham, Trinity Lutheran: The senior led the Cougars with 21 goals and had five assists. 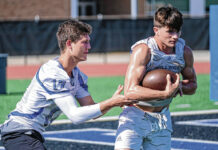 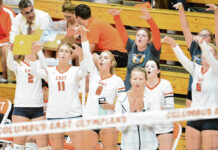 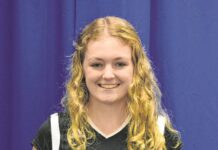