COLUMBUS, Ind. — Hundreds of fans in attendance came to watch the seventh- and eighth-grade boys of Central and Northside Middle Schools play basketball Monday night at Columbus East High School, but this year, it was much more than a basketball game.

Players, coaches, cheerleaders and the fans from both schools paid tribute and honor to someone who enjoyed playing basketball on the same court the players played on that night.

Between the seventh- and eighth-grade games, Central athletics director Nate VanDeventer presented to the family of Luke Poindexter a game ball that was signed by all the players from both schools.

Poindexter, a 2018 East graduate, was killed while working for a delivery service in Indianapolis in late October. The investigation into his death is still ongoing. 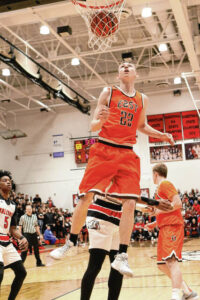 Columbus East’s Luke Poindexter watches as his shot drops through the net during a game at New Albany on Feb. 3, 2018.

Coping with Poindexter’s unexpected death has hit his family hard over the past month, but his father Kelley said the family has received much support.

“It’s been horrible, but it’s in fact not just my family, but a lot of people around us. We had an outpouring of support from the community. We had people reach out to us that have had similar situations,” Kelley Poindexter said. “It’s been very difficult. It comes and goes. You still don’t realize that he’s gone, and you expect him to walk in the door anytime. It’s still hard to comprehend that he’s not coming home to be honest. We’ve been so busy with the birth of his son and trying to organize this fundraiser, it’s kept us busy, but going into Christmas, it’s going to be difficult, so we’re going to need the support from our family and friends.”

When learning of Luke Poindexter’s death, VanDeventer and Central eighth-grade boys basketball coach Max Bumbalough thought of the idea to organize a fundraiser to honor his life and memory. They reached out to Northside athletics director Cindy McCoy to decide that Monday’s game would be a great opportunity for the fundraiser.

VanDeventer started reaching out to businesses and sponsors. T-shirts were made for the fundraiser, and the cheerleaders, coaches and players wore them during warmups.

VanDeventer estimates that around $5,000 was raised as of Monday morning before the game, and likely between $3,000-to-$5,000 more during Monday night’s game. Possibly more money could be added based on more checks and donations being received in the mail. All of the proceeds raised will go towards a fund for Luke Poindexter’s son, Gunner James, who was born Nov. 21.