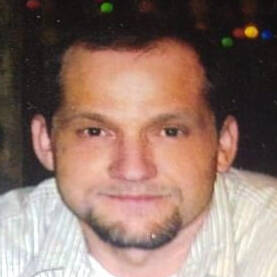 Danny loved spending time with his family and friends. He enjoyed sports of all kinds and participated in coaching sports with his sons. He could always be found tinkering in his garage. He loved dirt track racing. He was a driver, car owner and official at Twin Cities and Thunder Valley raceways.

Funeral services will be held on Friday May 13, 2022 at 10:00 a.m. in Jewell-Rittman Family Funeral Home with Reggie McLaurine officiating. Visitation will be on Thursday from 4:00 p.m. until 8:00 p.m. and on Friday from 9:00 a.m. until the service time at the funeral home. Memorial contributions may be made in memory of Danny to the Juvenile Diabetes Association.

Danny is survived by his wife, Lisa, whom he married on December 4, 1999; sons, Caleb (Alyx) Ogle, of Otwell, IN, Colin and Jake Ogle of Scottsburg; sister, Tijuana (Mark) Newton of Columbus; brothers, Tony Ogle of Columbus and Mike Ogle of North Vernon as well as several nieces and nephews. Danny was preceded in death by his parents and 2 sisters, Tina Ogle and Kathy Bell.

You are invited to view his video tribute, light a virtual candle of remembrance and send a message of condolence to the Ogle family via the funeral home website: www.jewellrittman.com