HOPE — During Thursday night’s softball game between Class A No. 2 Hauser and Class 4A No. 6 Columbus North, money was raised to help Bull Dog assistant coach Steve Norman, Columbus’ deputy chief of police and the father of senior Lucy Norman. He was injured in an accident May 10 in Indianapolis and faces a long road to recovery.

It was only fitting for Lucy Norman to get the final at-bat in the game. 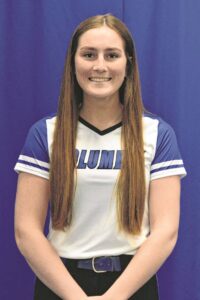 Norman made the most of it and smacked the ball deep for a double in the top of the seventh inning before lightning appeared and the game was called. With the game being reverted back to the previous inning, North prevailed with a 2-0 victory over Hauser in six innings.

Before the game, there was a moment of silence for Steve Norman and a total of $114 was raised.

“They had that moment of silence, which I thought was awesome,” North coach Ron McDonald said. “They’re great people over (at Hauser), great coaches, some of the nicest guys you’ll ever want to meet. It’s always fun to come up here. We enjoyed it.”

It was a strong pitching dual Thursday between the Jets’ Paige McDaniel and the Bull Dogs’ Maddi Rutan.

Rutan gave up only two hits and struck out 11 in the shutout. She had a perfect game going until it was broken up in the fourth inning.

“I knew that I was pitching pretty good, and I think my defense behind me did really well,” Rutan said. “We pulled through together. I really can’t do it without my defense. It’s not just a one-person game.

“Kelsey (Lovelace) getting on base and then (Lillian) Mackey hitting that shot put us in the lead (in the second inning),” she added. “It makes it so much easier as a pitcher when you have the lead. We did really good and pulled through.”

Hauser coach Andy Brunner was proud of the way his team fought against one of the top teams in the state.

“Rutan did a fantastic job tonight. We weren’t composed with our bats, but when you look at the level of competition, we haven’t seen a pitcher like that, and I don’t if we’ll ever see a pitcher like that all year,” Brunner said. “All in all, we made adjustments, the took the swing away and started to use the slaps and bunts.

“I can’t be any more proud right now. The confidence is there,” he added. “We‘ve got a long week next week with three trips to Rising Sun. I believe in our girls wholeheartedly. I’m not nervous about it.”

For Hauser (19-4-1), Izzy Brunner and Lucie Asher accounted for the two hits.